The weather wasn't promising. Snow yesterday and a cold night - a typical recipe for a stressful cold coming to church in the morning, with the added complication of visitors driving over from Rothesay and the Bishop and Mrs Bishop making the journey from Oban. Verily a recipe for an anticlimax, if not a disaster. But the county gritters had seen to the roads and our heroic Priest-in-charge-now-our-Rector had cleared the drive so that even the most timid could get to church for the service that would collate Andrew as our Rector. (This was a new word for me, in this context: given the weather and the temperature inside the building I could only think of a cold collation that might be served if one turned up late at Downton Abbey - but I wander). 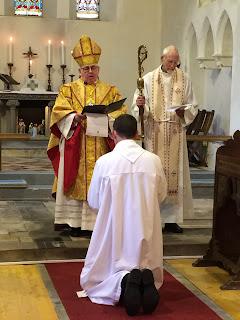 It was joyful to hear +Kevin tell us that we were a sign of the promise that we could be the instruments of our own change, that we had achieved what had seemed impossible and were a shining example, etc, etc ... and as I sat there I did think back to the days of doom and gloom and no money and doors that would shut forever after seven years, though mostly I thought that if we'd been less fortunate in getting this curate who used to design battleships then we might well have sunk without a trace. (That seems a suitable collocation of ideas, as opposed to a collation ...) 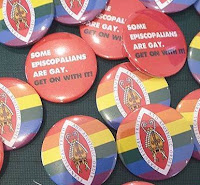 And there was another joyful thing. Yesterday - and on Friday, when the leak first escaped that the Episcopal Church in the USA was to be rapped on the knuckles for its acceptance of same-sex marriage, when the less well-informed press were announcing that they'd been kicked out for being naughty - yesterday I wasn't looking forward to today, much - didn't feel happy in my Anglican shoes, as it were. But then I arrived in the church, already pretty full of our own flock and the intrepid Rothesay people with whom we share our Rector - and found that all around I could see people were wearing badges. Not little, discreet lapel pins, but big, bright protest-style badges, courtesy of Kelvin, like the one I was wearing, like the one I'd given to Mr B to pin on his scarf (leather jackets and pins don't go well together). Badges like the ones in the photo. And I felt at one with the world - or at least the world in our part of it.

Because that's the point. There is no way a community can rejoice and congratulate itself and share fellowship if it is silently complicit in an injustice to not only many of its members but also countless other human beings who only want equality and justice. But I'd say enough of us are in this together to make rejoicing a possibility.

It was a good day in this part of the diocese. A good day. 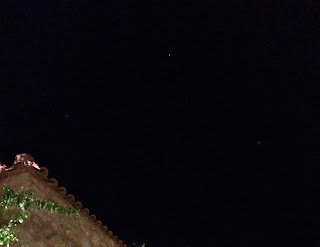 This the night when under the dark dome
the hard stars shine and that one
shines brighter than them all, the night
when power and pomp and wisdom and wealth
come seeking a king and find instead
love in ordinary, human love, vulnerable
to all that wounds beneath the sky -
This is that night. It comes again.

For earthly power was melted then
in tears of joy, of journey done,
of understanding what lay there
in poverty of place and rank
and all they knew, these visitors,
collapsed in shards of sudden loss
and left them free to live again -
This is that night. 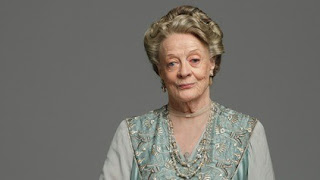 No, it's not a typo. In fact, I'm rather pleased with the title of this post, which came to me with the delightful inconsequence that sometimes surprises me. The punning possibilities are wonderfully appropriate too ... look it up yourself (if you need to, erudite reader) and see for yourself. But not, perhaps, before you've read this, my little New Year's ramble through my head ...

Like my friend Mother Ruth, I've been thinking I ought to get back to blogging more - the thought coinciding this time with the reflective season. As my memories of Christmas tend these days to be trotted out on Blipfoto, I'm reflecting this new year on what comes with the passing years. Is it honour, love, obedience, troops of friends (there's a theme here) and nothing more? Is it in fact none of these? (obedience? I ask you!) Is it something more ... inward?

Well, yes, actually. Inward, with outward manifestations. And it's to do with confidence. Not, I hasten to add, the confidence that had the 10 year old me scooshing along a slide in the ice, sure of my balance and the supple joints that kept me upright; not the confidence that takes you down a rocky path even faster than you clambered up it. No. There are endless nibblings that erode physical confidence by the time you get into that seventh decade. But I've recently realised that I no longer fear being somehow "found out", and that's a big compensation.

So what kind of fraudery was I scared of being discovered in? Perhaps the easiest to pin down was one I've mentioned before. When I moved to Dunoon with my five-week old baby I discovered that everyone I met regarded me as a fully-fledged, adult mother who also happened to be a fully-fledged member of the Scottish Episcopal Church. In fact, my membership of that body was almost as young as my son, and I no more felt like an adult that I did a Klingon. (Why did that comparison slide in there?) I was playing a part, and surely it was only a matter of time before I was found out.

Five years later I became a member of the General Synod of this church I had only recently joined. I was the youngest lay member, for sure, and may even have been younger than the most juvenile clergyman present (remember - they were all men, in these far-off days. There were only 13 women on the whole body in this, its final manifestation; we had voted ourselves into extinction by the time my stint was over). I looked in awe at practically everyone present, and was sure they thought me a child. The only person who seemed on the same planet as me was Richard Holloway; one day, at lunch, he offered me "some barbecued peas" and we laughed.  Did he realise how I felt?

But to the present. The joy of being the age I am now is that I know who I am, what I can do. I am less likely to take on something that I don't feel comfortable doing, so the things I do undertake I undertake confidently. I care less, much less, what people think of me - whether it's the colour of my hair (currently a sort of Pentecostal red) or my political opinions. The people I love may disagree with me about issues large or small, but it won't stop me loving them. I have fewer bosom buddies than in my teens, but have learned the importance of knowing who can be relied on in a corner.

I could, I realise, go on and on ... Bishops are all younger than me; clergy have to earn my respect like anyone else; I don't worry about fashion (did I ever, much?); I don't mind people knowing I watch East Enders (hasn't it been black over Christmas?); I no longer read books because I should. I find myself able to speak to all sorts of people on all sorts of topics, from bereavement to equal marriage, and find them listening as if I actually have something to say.  I will no longer be patronised.

Perhaps all this is what lies behind the wearing of purple, the living in a van, being Lady Violet Crawley ... all these impossible old women of popular culture. Purple doesn't go with the hair right now, and I'd find a van chilly, but I can see a future here ...
Posted by Christine McIntosh at 5:20 PM 3 comments: Links to this post