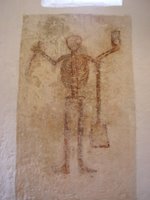 I've used this rather scary pic of a memento mori, taken in Patricio church (see below), to intoduce a brief maunder round the uses of blogging like this. My American friend Walter commented a couple of posts back to thank me for pointing him to the Guardian photo I linked to - and went on to publicise the photo, with its accompanying story, on a chat group to which I also belong.

Now, I realise that on the whole I chicken out of political statements on the chat group, where most of the participants are American. I shy away from the intricacies of debate which might ensue, partly because it will be conducted from a standpoint which I cannot share or involve the politics of the USA, about which I may have strong feelings but feel unable to express them too trenchantly in that forum. I suppose I feel it's like being rude at a party. I've been in that situtation in my younger days, when I would be invited to parties by American naval families and find myself in earnest conversation with the entire wardroom of a nuclear submarine - hard to stay lighthearted and inoffensive there! Sometimes I would allow myself to "come out" as a member of CND in a one-to-one with an admiral (Yes, they were there too) but it was a tightrope - you're at a party and you're a well brought up person .....

Anyway, the gist of all this is that I feel free on my own blog to say what I want to. In public - if anyone wants to read it. Even if I don't have much to say. And here I'm going to reproduce what my friend had to say, because it gave me hope. He wrote this:
" We who sit so comfortably far away from the carnage, we can watch the television yappers talk so bloodlessly about strategies and provocations. But, somehow, we must find a way to demand, first, that our own military no longer be used as the enforcers of the pax Americana which is no peace at all. Then, we can demand that those whose militaries we support be accountable or go their own way."

Amen to that.
Posted by Christine McIntosh at 11:14 PM