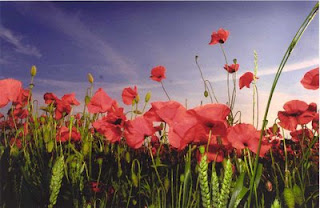 Remembrance Sunday has been a difficult day for as long as I can remember. From the day my three-year-old self wondered why my normally cheerful mother would become tearful because of whatever-it-was on the radio, right through to the years when I was stuck in the choir in church resenting the inclusion of the national anthem in the day's hymns, struggling to reconcile the religious faith which had landed me in CND, demonstrating, making speeches and appearing on TV and radio to deplore the deployment of nuclear weapons with the church which at that time seemed to deplore what I was doing... it's not been a day with which I felt safe.

And then I end up in my current role as a member of our lay worship team having to preach a Remembrance Sunday sermon. It was the most difficult of all I've done, mainly because I couldn't actually imagine myself doing it. I didn't know where to start. I think I had visions of people who knew my past standing up and hurling things - no matter what I said.

It didn't happen. I realised as I worked on the sermon that we all move on, and that compassion had replaced anger as the overwhelming emotion of the day. But I wonder if I'd ever have realised that if I hadn't had to stand up in public and address the issue.
Posted by Christine McIntosh at 6:02 PM