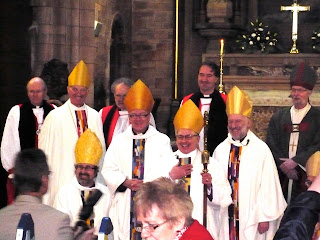 Don't they look jolly? The chaps in the gold hats are the current bishops of the SEC; the others are either retired or from overseas - but the one in the centre, the one with the biggest smile, is Bishop Kevin, the new bishop of Argyll and The Isles. I managed to get this, among a clutch of snatched-and-blurred pics, by leaping in an unladylike fashion onto a pew in the cathedral as they finished the photo-call; you can just see the official photographer in the bottom left.

But enough of the technical stuff. On a day when the wind threatened to lift the roof and the rain battered down on the alarmingly glass roof of the choir, an unfeasibly large number packed the cathedral to see Bishop Kevin consecrated and Bishop Mark give up the burden of looking after us - it's been a long haul, and he's been brilliant. There was a considerable invasion of Edinburgh folk, obviously loathe to let +Kevin go, and a selection of luminaries from other parts of the province, all interested by the Argyll weather and the possibility that gaiters might be worn (they weren't). Kilts there were, however, and some tartan trews, and tweed - not to mention the odd fleecy jumper.

The Right Reverend David Conner, Dean of Windsor, preached a sermon that drew heavily on Philip Larkin's poem Church Going. Written 60 years ago, it gives a picture of the poet - and Larkin himself took part in a TV film that showed him, bicycle and all - visiting a church, going in only when he is "sure there's nothing going on". Larkin, said the Dean, was like the Greeks in the Gospel of the day who wanted "to see Jesus". Although Larkin said he was "bored, uninformed", he nevertheless often found himself "tending to this cross of ground" because of what it held, what it had held over the ages, and this was a commonly-found attitude of the majority of people nowadays, who still have this hunger without really knowing what it is they seek. Bishop Kevin's role was to be a leader in mission, relentless in his prayerful quest to show the love of Christ in the world so that those who seek find not barriers and impenetrable theology but rather the answer to the need they might not fully understand, the "hunger ... to be more serious".

"Reach out, my friend," he said in conclusion, "reach out, but dig deep."

The digging will soon begin, but for this weekend, it seemed, the celebrations were paramount. And after a service lasting over two hours, the hungry horde scuttled along the road like so many Mary Poppinses under their billowing brollies and descended on the purvey in the Argyll Gathering halls. When we left, five hours after arriving, the rain was still falling steadily. We surfed home through the gathering gloom, crashing through the potholes that seemed to have multiplied since the morning. At least we didn't crash the car. Summer consecrations must be more dangerous - we drove into a ditch after the last one.
Posted by Christine McIntosh at 11:51 PM