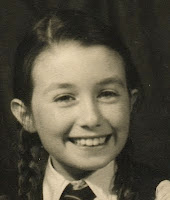 Today I'm going to visit the school this grinning child attended: Hillhead Primary School in Glasgow. (And if you follow me on Twitter you'll recognise the young Mrs Blethers - the photo was taken when I was about six, I think, or maybe seven. My pigtails vanished when I was ten.) At the time, the uniform was strictly adhered to; the school was one of Glasgow Corporation's grant-aided selective schools for which an entrance exam had to be sat, a consequence of which being that you could be asked to leave it you were deemed unsuitable in any way. So there I was, in my navy gym-slip with the box pleats and the badge; the cream blouse (never, ever white for the girls); the navy tie with the gold and brown narrow stripes. My hair ribbons were navy blue and my knee-high socks an unpleasant brown.

But I loved school; I loved it wholeheartedly and was as sad to leave at 18 as any heroine of a girls' school story. I never even noticed that the outdoors toilets were a barbaric and chilly idea - and they froze solid in a cold winter and we were all sent home - nor cared that the arrangement of stairs in the Primary School was such that some classrooms could only be reached from the left-hand stair. (I did, however, quail at the idea of asking the fierce teachers in the middle landing for passage through their classrooms if I got it wrong - I preferred to sprint downstairs and start again.) We played all the traditional games in their proper seasons - skipping, ball-games against the wall, scrap-swapping (a winter pursuit, carried out in the shed) - and wildly dangerous ones, like first dreeping off a ten-foot wall and then learning to jump off it without breaking anything. I still remember the concussion of landing on the concrete - and I was a skinny wee thing.

I shall doubtless return to this topic after this evening. The school is to be moved to another site, amalgamating with two others, and I have yet to discover the future of the building in Cecil Street. I shall take my camera, and there is a chance that the visit might destroy some memories. But I doubt it.
Posted by Christine McIntosh at 11:17 AM