Boy in the Striped Pyjamas 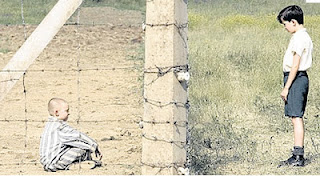 I've just been watching the film of John Boyne's The Boy in the Striped Pyjamas. I haven't read the book, and I'm interested to read a review tonight which reminds me that it is "a holocaust book for children." I don't think I for one moment thought of the film as anything but adult, despite the fact that the events are seen through the eyes of an eight-year-old boy. Perhaps viewing his world through the lens of a camera meant that I was free to interpret in my own way, find my own knowledge flooding in with the images - like that of the smoke from the death camp rising foully over the trees - in such a way as to encapsulate the child's innocence and look over and around it.

I found it very powerful, this film. I'm fascinated by the apparently normal family lives of Nazis immersed in the horrors of the Final Solution, by the glimpses of a humanity suppressed - perhaps permanently - by the demands of the job of extermination. The film was full of foreboding, from the moment when the family of the Kommandant arrives at their new house in the country, a gloomy, echoing building of small windows - one of which, in the boy's bedroom, commands a distant view of what he thinks is a farm - right through to the end which I couldn't help wishing would not be so. The gradual realisation by the boy's mother as to what exactly was happening in the camp, the growing tensions within the family as the 12 year old daughter became Nazified - these, I felt, were explored in the film at an adult level, being conveyed less in words than in expressions, gestures, the glance of an eye that was quickly averted.

The tension of the last fifteen minutes of the film, and the understated conclusion, left me wrung out and sad to an extent I had not expected - more, even, than the much bigger sweep of Schindler's List. I'm glad I recorded it.
Posted by Christine McIntosh at 11:45 PM