The Advent of Advent 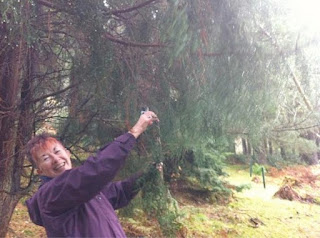 The mornings are dark; the darkness returns early. Tonight it is chilly and more gales are threatened. The sea is restless and the trees groan. Living here, it seems unreasonable to have a tidy Advent wreath, with neat flowers or tidily trimmed holly or even - shudder - the plastic variety. No, we go more for the exuberant greenery that has not a little of the pagan about its appearance, complemented by the wonderfully suitable pink berries from the cotoneaster (I think) in the church grounds. Arguments have raged in past years about the colour of candles to be used in such a wreath, and I maintain to this day that God put that bush in the grounds to encourage us to the purple and pink variety, but that is another story.

The photo shows the initial stages of the process: find your greenery. I am unwilling to give the exact location of the trees that provided ours this year, as I and my accomplice should not really have been doing this thing, but we were careful - and some of the best trees actually had fallen bits that were ideal for our needs. On this occasion we deterred any witnesses by having with us a small and wailing child, though the best deterrent was probably the weather forecast. At the moment of the photo, I had just been deluged with water from the branches. You can see that I am a cheerful, uncomplaining sort ...

Anyway, the wreath is constructed and looks rather fine. Apart, that is, for the candles - the person who takes delivery of them had not yet produced this year's box, and we had to make do with purple ones, of which we have a goodly number left over from other years. (The uninitiated should note that when Hayes and Finch sends out Advent candles, they allow for people to have four purple and one white, as well as the pink one for Gaudete Sunday. If you use the pink one, you build up a stock of unused purple candles). Perhaps I shall manage a photo on Sunday if the new ones have turned up. If you really cannot control your impatience, you can see a past effort here, though I note that it looks considerably less fulsome than later offerings have become. And the berries look more red than pink. I shall endeavour to take a pic in daylight.

I love Advent. Can't you tell?
Posted by Christine McIntosh at 6:08 PM