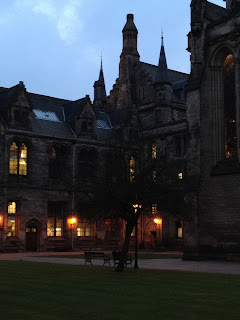 A concert in memory of Kenneth Elliott had me back at Glasgow University last night. Oddly, I felt most at home actually in the Memorial Chapel, to the right of this picture of the Arts Quadrangle, although in my first year I seemed to spend an unconscionable amount of time queuing in the corner where the lights are, in the icy wind that seemed to whirl round the quad in October. The Latin lecture theatre - or Humanity, if you prefer - was right in the corner, and I have a feeling we accessed our English lectures somewhere nearby. Not that I ever queued for Latin, for the lecture in first year was at 9am and if you were foolish enough to arrive a minute after 9 the door was locked and you had to go through the prof's room and sit, isolated, in the window bay with a splendid view of Glasgow and the red face of the marked one. I was always on time.

There was a moment of consternation last night when I realised that the huge, freezing loos that used to lurk at the foot of the stairs up to the Arts quad (or the Science stairs for the chaps) had gone, replaced by offices. They always seemed to be open; I don't know what evening visitors do now. The staff toilets, however, where we were directed from the Chapel, were a far cry from the old provision.

But the chapel seemed less changed than other places. To be sure, there are new, back-damaging wooden chairs lower at the rear than at the front, linked so close that it was as well that we were sitting with old friends, but the choir stalls where we sat were the same - except that the choir wasn't singing from there last night but from the area round the communion table. There was an exhibition on the walls as part of the dubiously-named Lent Fest, but otherwise it was the same lofty, strangely godless but acoustically interesting space as ever - great for singing, difficult for speech. (Though I do think that someone who works in the Uni ought to be better able to project his voice than the chap who introduced the concert).

The Chapel Choir sang beautifully - some lovely sopranos - and much of the music was very familiar to me. So I noticed when there were ... deviations. Ah well.  Afterwards, we chatted outside with friends,  as we might have done had we been going for the bus to Broomhill - only we were heading for the midnight ferry.  No chance, then, of remaining in the past ...
Posted by Christine McIntosh at 12:46 PM