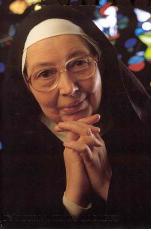 I was listening to Desert Island Discs yesterday - or rather, it was on in the background and I suddenly became interested. The castaway for the week was Sister Wendy Beckett, and what she had to say about her life - in a caravan - fascinated me. (Quite apart from the notion of living in a caravan - not having done this thing I can't help wondering if they're warm enough in winter, cool enough when it's hot ... that sort of thing.)

The focal point of her life is the Eucharist, and the occupation without which, she told us, is prayer, contemplative prayer. I think I knew this already, but I found myself thinking about solitary prayer in a different way. Apparently, Sister Wendy gets up at midnight and spends seven hours in contemplative prayer. Put like that, it sounds to the would-be Christian such as I am like a penance. Seven hours for me would end either in sleep or in complete distraction. Someone like me gapes at the thought and - in her more self-chastising moments -  wonders if she ought to try harder. But listening to Sr. Wendy speak, it became apparent that the hours spent thus are for her an enormous pleasure. It seemed to me that she sinks into prayer in much the same manner as someone who is looking after a young baby, say, sinks into bed; she longs for the time in prayer as a sleep-deprived person longs for oblivion.

The brief moments of such prayer that I have achieved were enough to convince me that such attentiveness can be hugely rewarding, and I suddenly saw this apparently rigorous lifestyle as something chosen, something pleasurable, not something to feel humbled by. Wendy herself admitted that she doesn't need people, she needs God; she may be wonderful on the telly talking about art but really what she was going to miss on this putative desert island was the Eucharist. Someone, she said, once remarked how she didn't need other people, and she didn't think it was necessarily a compliment.

People like me need other people, connections, feedback, performance. Solitude requires distraction. In a way, I suppose you could regard the contemplative life as one spent largely in the silent company of one person. Extend the metaphor to communication: if prayer is a phone call to God, it can be brief or it can go on for hours. But often in human existence these days, it is enough to receive a brief but loving call - or even a message on social media. It's the checking in that counts. So I'm going to recognise that my full life isn't a drawback or a hindrance, or something to be deplored. It's the way I thrive, and as long as I make frequent phonecalls it doesn't matter how long they last.

And just once in a while, if I'm lucky, I'll manage to stay on the phone longer.
Posted by Christine McIntosh at 7:19 PM