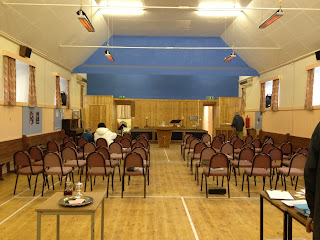 What makes a church? The answer, the obvious answer, the answer you know to be the right one, is the people. The community that worships together. That's the church. And it was in that spirit that we met today in the venue shown in the photo, the church hall where, once upon a lifetime, I took the Managing Editor of BBC Online and the CEO of No Tosh Ltd to play with their pals in Toddler Group and Playgroup; where the wife of our last Bishop and I told people of the lively worshipping community on Kilbride Hill and encouraged them to join us and bring their children. It is also the hall where for years we went to vote in elections, outside which I used to stand with a CND badge and a stack of leaflets, picketing all those going in to vote and putting up with the banter of the Tories ... I could go on. It's a place with a lot of memories for me, and today and for the next few months I'm going to acquire a new set as it stands in for Holy Trinity church, about to turn into a building site as the lottery-funded renovation gets going.

Interestingly, the hall, which now belongs to the High Kirk and which they are graciously letting us use as we require, used to be a Scottish Episcopal Mission Church - the Church of St Andrew - so in a sense we were returning, with our 19th Century chalice, to roots that predated even the oldest member of the congregation.

How was it for me, do I hear you ask? Well, despite the fact that most of us resolutely sat in the same relative positions as we do in church - you can see two doing that in the picture, setting the trend - it felt nothing like church as usual. That's not to say it was a negative experience, but it wasn't what I look forward to on a Sunday. In the hilarity that preceded the service, it felt being in a holiday house with a large family as people discovered they had a heater overhead and had to strip off layers of clothing, or dropped hymnbooks and rummaged on the floor to retrieve them. The piano turned out to have a broken damper, throwing Mr B into a gloom, though neither gloom nor busted bit seemed to affect the music which miraculously shut everyone up and produced a tense unignorable silence (thanks, Larkin) before the service began.

So the good bits? The children had a room for their activities, with a door that shut, meaning they could make all the noise they wanted and have fun. (I think they did too). It was cosy. We felt like a family, perhaps even more than usual - a family on an outing. The calamine-lotion coloured tongue-and-groove boarding and the Virgin Mary blue of the wall miraculously replicated the interior of Holy Trinity's colour scheme, which raised a smile of recognition when I should have been concentrating. And our priest made it all work with an assurance that was in itself reassuring, interestingly.

On the downside, there was the dead acoustic, the feeling of being crowded, the piano accompanying the singing instead of the organ, the lack of visual beauty, the missing sense of the numinous that pervades our church building. I've worshipped plenty of times in a similar kind of venue, and this felt like one of these ad hoc communions for a meeting - jolly, enthusiastic, but lacking. 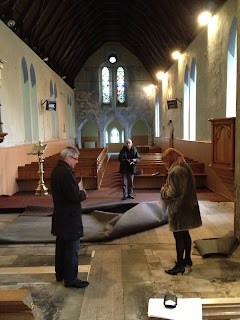 Once upon a time we were threatened with the loss of our building, the possibility that we might like to think about some modern, town-centre place of worship. This experience gives us the chance to see what it might have been like. I for one am happy beyond words that hard work and circumstance - and the Heritage Lottery Fund - have made it a temporary one. This week, the work begins on our church on the hill, and late yesterday afternoon we returned there to make a recording, the story of which is told elsewhere.

It was exciting - the acoustic, already fine, was wonderfully lively with the exposure of the stone flagged floor. I look forward to going home ...
Posted by Christine McIntosh at 12:21 PM