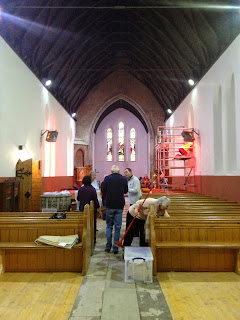 We're ba..a...ck! (All right, that movie wasn't yesterday, but I can't resist the probably inappropriate allusion) A gang of us descended on Holy Trinity Church Dunoon this morning, fighting our way past the men in hard hats who warned us that once inside we'd not get out as they were dismantling scaffolding, negotiating the piles of scaffolding poles and discarded bits of mysterious metalwork to see inside the church we'd left looking desolate and dirty on Low Sunday. We weren't there merely to gawp, but to make it fit for use on Sunday. Gawping, however, came first. To the stranger, it might look as if little had actually changed; the sanctuary, for instance, has paintwork to be done and the central aisle has rough boards covering the space where the various heating systems have had their workings, but the hideous calamine-lotion coloured wooden dado has been replaced by dark red painted plaster and the whole floor is no longer the worm-eaten, rot-weakened potential disaster we had been sitting on top of for all these years. The strangely amateurish platform on which the choir stalls used to sit is gone, the whole area of the choir now restored to its original structure with not a carpet in sight. With any luck, that's how it'll stay. And those of us who've seen the photos of what has been done, we know the awfulness that has been transformed all around us.

The effect was strangely dreamlike - when I sat down as if for a service, I felt the unreality that accompanies dreams of familiar places, and I realised that there have been times in the past where I have indeed had near-nightmares about our church being taken over by people who changed everything so that it no longer felt like the same place. But there's a great feeling about this dream, a dream that includes using that marvellous space for musical performances that the carpetless acoustics can only enhance. And the narthex - just look at the picture of the narthex with its plaster gone and the stone laid bare - reminded me of the lovely buildings we stayed in in Sicily, where the bare stone contrasted with the modernity of the furnishings. I have visions of golden uplighters at floor-level ...

But all this - the enthusiasm with which we all set to work dusting and polishing (all the time hoping that the men on the scaffold tower in the photo don't make too much mess putting in the last window), the laughter, the marching through the rain carrying altar frontals and altar-rail kneelers, the determination to get rid of the foosty cardboard cups that had languished throughout the works in a cupboard under the tower and did odd things to the coffee - all this brought it home once again how important our building is to our worship and our life as a community. People have talked, recently and in the past, of how enlivening it could be for worship to be transferred to a modern space, perhaps one in the town centre where parking would be easy and more people might know we were there and come.

It's not been like that. After the initial hilarity induced by finding ourselves in a strange hall the worship turned out - for myself at least - to be difficult. On the days when I simply didn't feel like going, there was nothing in the environment to give me a nudge towards prayer or mystery. The music was hard going - the piano a sad thing, tending to die a little each time Mr B attacked the keys with anything like a forte; the dead acoustics accentuating the poor sound of the singing so that the less confident gave up singing altogether. The receiving of communion always seemed a tad strange, in that people didn't seem able to achieve a normal sort of progression from seats to front and back again without becoming entangled in each other. You can be jolly about this - and God knows we tried - but it becomes wearisome, a chore. It reminded me of wet days at the CSSM of my childhood holidays, when we had to have our services in a hall rather than on the beach - and there is no way I ever wanted these days back again.

So if anyone asks if this has been a positive experience, I would have to say that it may still turn out to have positive benefits in terms of valuing what you have - but I cannot say I shall miss any tiny bit of the worship over the past 6 months. I became an Episcopalian - I became a Christian, in fact - because of the enabling beauty and numinosity of the two church buildings in which I found myself, and I can't help thinking that we give our leaders an unnecessarily uphill task if we expect them to bring mystery to the mundane on a weekly basis. I don't think our congregation grew in any way because of the convenient location of the hall we were in, and I know for certain that my own spiritual growth was put on hold while I combatted the temptation to go for a walk on a Sunday morning.

Yes, it's good to be going back. And I must add one thing: somehow, we were given the right leader to see us through all this.  How often does that happen? 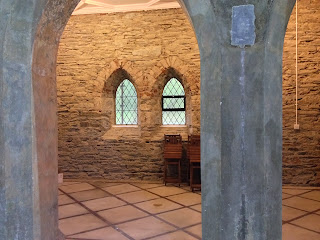 Posted by Christine McIntosh at 5:39 PM