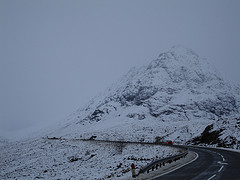 Scotland is an amazing country. In one day we passed from the bright sun and autumn colours of the far north-east to the deep winter of Glencoe (pictured) - although the autumn leaves were still visible against the snow in several places. The first thing which struck me was the enormity of the windmills in a windfarm just south of Thurso - there are some pix on flickr which show them. It brought it home just what we have to do to our country to maintain the absurd standards of comfort on which we insist (the hotel had been so warm), just as did the huge lorries negotiating the Berriedale Braes on their way to and from the north coast towns - terrifying gradients with inadequate-looking escape runs off to the roadside.

There was a further comment on life in these parts in the sight of the Duke of Sutherland's huge statue on a plinth high above the town of Gospie. Even after we had crossed the Dornoch Firth I could still see it - it dominates the landscape more than any windmill or radio mast - and I couldn't help reflecting on how the people of the area must feel about it. do they notice it any more? Do they still feel resentment for the fate of their ancestors? Or are the people now living there in some way a replacement for the families who were cleared from the land in the past? Dunrobin Castle is now open to visitors; we can pay to gawp at a privileged lifestyle and feel glad that our money goes to offset the cost of maintaining it - can't we? But onward and southward, for the weather will not last ...

It broke as we headed down the Great Glen. The snow which we had seen on the distant hills was now beside the road, and actually on the road in north-facing bays in Drumnadrochit, where the temperature barely rose above freezing. As we drove into Fort William the first blobs of sleet hit the car, and by the time we reached the Glencoe Visitors' Centre it was gloomy under a dark sky. I've never been in Glencoe in snow; it was an awesome sight heightened by the presence overhead of two rescue helicopters. At the highest point of the glen the snow was all around us and the mountains merged with the darkening sky as we climbed back into the warm womb of the car and headed down the road.

It snowed almost constantly from there to Loch Eck. We drove into the funnel of white shrapnel till we were dizzy, and were glad to arrive exactly eight hours after leaving Thurso. I've made the odd reference to our need for fuel to keep us going, but there is one fuel fact I have omitted. We travelled that whole 300 mile journey on a great cooked breakfast - that, and a lump of chocolate cake in Glencoe.