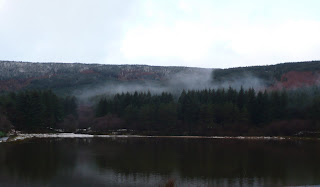 I associate this time of year, rather oddly, with looking at houses. Specifically, houses and flats in Glasgow in January 1970, with a view to buying somewhere to live after our wedding that summer. One of the most heartening aspects of what was frequently a depressing process was the fact that it was still daylight after work, and that we weren't always looking at these houses in the dark. The photo above was taken this afternoon in the slightly snowy Bishop's Glen - at about 3.45pm, I think. That's what the light actually was like - I've been fiddling with exposures but wanted the real thing as well.

But later, I had to go down to the shops. At 4.40pm the sky had cleared and it was still light - light enough for the big cumulus that had passed to have a bright whiteness about it against the pale sky. A bright star - presumably a planet - reminded us that night was coming, but I felt that same lift of the spirits as I did on the house-hunting days. And by the second half of February - birthday-party time when my boys were small - the sun will still be visible at coming-home-from-school time and Spring will be on the way. Cheers!
Posted by Christine McIntosh at 6:07 PM