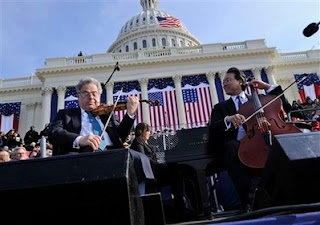 There was a wonderful moment in today's Presidential Inauguration ceremony - a quiet, reflective moment between the swearing in of V-P Joe Biden and President Obama, when a wonderful quartet played a new take on the melody Simple Gifts. The playing was sublime, and the effect breathtaking. And what did the BBC commentators do?

They talked. They said "We'll let you hear the music in a moment, but first ..." and on they went. Mercifully I had access to Sky HD: no talk at all, just the music. No annoying ticker-tape along the bottom of the screen either; they had this well sewn-up. So apart from an enraged 10 seconds or so I was able to listen, watch and enjoy.

It seems crabbit to moan on such a joyous day for so many people - and I share that joy, as much as any foreigner can. But I'd put these blethers in the stocks in chilly Washington, and with them the chap administering the oath who muddled his word order and could have learned from the aged guy who swore in the V-P.

Final thought? What a job to take on. It showed in Obama's face, I thought, as he walked towards the door onto the podium. In that moment, for all the millions who were waiting for him, he looked totally alone,
Posted by Christine McIntosh at 11:54 PM