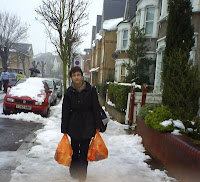 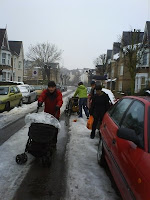 I'm having an adventure break. Not in Tenerife, yet, but in London, in the snow. We arrived last night clad, as it was pointed out, for a ski-ing holiday in boots and fleecy hats; I had thought that the gear might look a tad odd in South London, but no. Our first thrill came when the cabbie balked at the side roads and dropped us off to walk to the house - about half a mile of rutted, frozen snow, dragging a suitcase and struggling to maintain momentum every time we came to the slightest incline. We made it, though I felt as I used to after a couple of hours of sledging.

This morning we went out with the pram - for coffee, for exercise and fresh air, and for the shopping. McIntoshes are not easily deterred from the important things in life, especially the first two. The photos show us nearing the house. As it rained in the night, the car-tracks in the middle of the road have actualy thawed a little, and that is where we walked some of the time. But the pavements are still lethal - and there is no sign of grit on them. I recall the stushie in the Dunoon Observer after the sudden cold snap a the beginning of December - all these complaints that only one side of the road had gritted pavements and so on. Dunoon, I have news for you. London is ten, twenty - fifty times worse. This is like life in '50s Glasgow, when the snow lay till it turned to brown sugar and your slides stayed slippy for days on end.

As you can see, Mr B used the pram to overcome his horror of icy roads; I pretended I was in New York and found I got used to the motion after a bit. It feels a bit as I imagine Tai Chi does - all that controlled effort. But I'd hate to be one of these frail elderly folk I saw near the supermarket, with no-one to help them and no pram to hold onto. They looked terrified. Apparently it's just not worth it to have snowploughs and gritting lorries for such infrequent snow - but a grit bin on every corner? Surely.

Once again, Blogger is proving tricky to format - hence the widowed "I'm" above. Put it down to a visual representation of a break, please...
Posted by Christine McIntosh at 12:54 PM