Roman excesses in the Dome 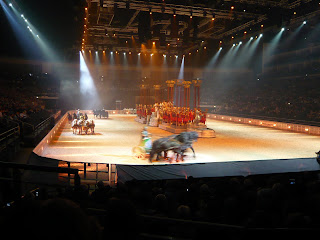 See the things you can do in London? This is one of them: a night at what I still think of as the Millennium Dome but which is now called The O2 to see Ben Hur Live - and yes, it was the story, much condensed, and yes, there was a real chariot race which hadn't actually started when I took the picture here: this was the parade before the race as the crowd cheered as wildly as any Roman mob.

Having checked out the website and read a preview, I knew it was going to be a spectacular event - I was thinking Cirque du Soleil in Vegas, maybe - but I was unprepared for the sheer scariness of it. To be honest, it was the horses: it took only the first prancing and slightly unruly beast to appear in an early sequence to bring the circus unpredictability into play, and it was immediately obvious how much power four horses have when hitched to a flimsy racing chariot. And all the right things were there - the wheel coming off one of them; the luckless driver being left in the path of the oncoming beasts; Messala being dragged round the arena when his team parted company with his chariot. All except the knife blades on his wheels - I suppose that might have gone a tad far in these chicken-hearted times.

And the noise was immense. I am a sucker for the kind of music where the bass makes the seats vibrate, and some of the music the other night was on the point of deafening. My ears were ringing and I loved it. And talking of ears: the main characters spoke in Latin and whatever appropriate language Ben Hur and co would speak - was it Aramaic? - and the narration, in English, filled in the synopsis. Clever, I thought - the authentic touch, easily exported to any arena by switching the language of the narration. And the joy was that I could understand the Latin, so sat smugly while the woman behind me went on and on about not understanding a word.

A truly Roman sort of night, really - over the top, loud, violent, scary, totally ridiculous, in a huge arena in front of a huge crowd. Caligula would have loved it.
Posted by Christine McIntosh at 6:39 PM