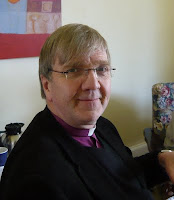 It was my turn this week to write up the service at Holy T for the local paper. Thirty-one years ago in the same paper (oh dear - I must be getting old) I wrote of the institution of our new Rector, a young priest called Martin Shaw. There is a photo in the yellowing clipping of a grinning, bearded cleric as he prepared to embark on his first solo job after curacies in Scotland and England, and I well remember the excitement generated by his arrival. Today that same priest, sans beard, came to celebrate the Eucharist for the last time as Bishop of Argyll and The Isles. I've tried in my piece for the paper to give a flavour of the occasion, to put down some of the salient points of the sermon and so on, but this is what I'm writing for me.

+Martin has the power to light up a room, to stir even the most torpid of congregations to life. His preaching is as vigorous as it ever was, and has a tendency to get under the skins of his hearers even as they laugh at his preposterous jokes. He can switch from humorous to holy in a turn, and his singing (the solo bits in Ubi Caritas, if you're interested) makes the hair stand on end (and no - I don't just mean mine). When he left, after one of these bring-and-share lunches that make the feeding of the five thousand seem probable, there was the kind of flatness you feel when the bride and groom leave a wedding. It seemed too early for him to go, either from our lunch or his job as Bishop, and yet I was glad to see this day. 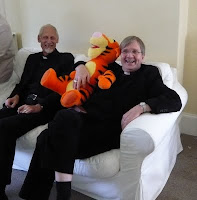 Why so? Because I thought that today there was a real feeling that "it is accomplished" - that a job had been done and it was in fact time to go. Far better to retire while you're still crazy enough to hug a stuffed Tigger (see left) and laugh at life, far better to enjoy a life where you don't - theoretically anyway - have to do anything. Martin's will be a hard act to follow, and I have no idea who will be his successor. But it would be good if it were someone who knew that there were never any excuses for his or her actions; someone who could laugh at him or herself; someone who knew his or her own failings. And it'd be really, really good if they could sing too.
Posted by Christine McIntosh at 10:43 PM