Christie in a country house? 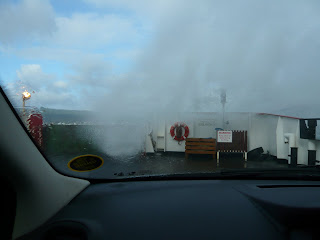 Having gone on about the storm brewing last night, I had to use this pic to demonstrate the hazards of life in these parts at this season - for are we not just out of the octave of the equinoctial gales? It was taken through the car windscreen as we sat on the Western Ferries coming home this morning, having forgone breakfast in our lovely hotel on Arran to catch the first ferry to run, just in case it was also the last.

But it is really of last night that I wish to tell. For after dinner, as we sat deep in squashy leather sofas beside a log fire, we were joined first by three jolly golfers and then by a couple from The South - all of us due to catch the ferry on the morn. I suppose it was the laptop that brought us together, as we could all see for ourselves the expected wind speeds on the met office site and the Cal Mac status reports. Mr B and I were modestly sipping espresso and nibbling the wonderful sweetmeats thoughtfully provided with it (just in case we perhaps had a tiny corner left), but the malt was flowing and the banter becoming more hilarious when we heard that the last boat of the day had been cancelled, and the first of Saturday, and the boat was lying overnight in Brodick. No-one knew if it would sail in the morning, and remarks like "It depends on who the captain is" did nothing to reassure.

It was, of course, typical Agatha Christie fare: the country house; the sense of isolation, of being cut off from the outside world; the contrast between the soft lighting and warmth and the howling darkness outside; the occasional interruption as some windswept traveller, gleaming with water, burst in at the door. One of our number would surely be dead by morning, in mysterious circumstances. Questions about occupation revealed a surgical instrument maker in our midst ... a banker ... an accountant ... surely there were sinister implications here?

Actually, no. At least four of us caught the first ferry together, having survived the night and the anxiety. But I caught no further glimpse of the Jolly Golfers. Perhaps they decided to stay and have that last game in the gale. I do hope so ...
Posted by Christine McIntosh at 6:03 PM