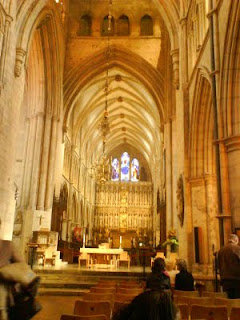 To Sung Eucharist at Southwark Cathedral. And an excellent eperience it was too; not least because Mr B and I, freed from the constraints of being part of the machinery at Holy T, could sit peacefully together in the middle of the congregation and enjoy the seriously good choir (the setting was Byrd's Mass for five voices), a crisp and simple sermon and wonderful incense. Actually it was the combination of this particular incense and this particular music that took me back to when the Anglican church was a new and wonderful mystery for me; when something magical happened to me every time I was in church. Then, of course, I would have been singing the Byrd, but I was interested to note that it didn't matter to me that today I wasn't: the magic was there, in the other-worldly distance, and I was content to listen.

I've become so involved in doing church these days that I sometimes think I've forgotten what it's all about. I hold forth about not having to sit and listen to a choir sing the setting, that I'd rather we all joined in - but I'm talking poor choirs, not wonderful ones. I maintain that we can continue with our worship in the interregnum without the weekly presence of a priest - but I find myself sighing with relief at a beautifully conducted Eucharist, where there are no worries that someone will do something wrong, or forget what to do next. I can let go - and that, of course, leads to other barriers falling, and that is A Good Thing.

There were many good things to observe today - the sunlight streaming through the smoke halfway through the service, the lusty congregational singing (even if the man behind us had a very penetrating voice but a lamentable tendency to drag), the wonderful organ (especially when it let rip at the end of the closing voluntary), the very mixed, very large congregation. I felt safe, I felt part of it, I felt welcome - and at the end, we were welcomed by the celebrant, who admitted to favouring this particular incense because it was less likely than other varieties to make her cough.

And a few random insider observations: we all shook hands at the Peace - there was no grinning and bowing as has become the norm in the Diocese of Argyll in these pestilential times - but received in one kind only. And I was pleased to see that no-one, not a single server, be they never so sylphlike, wore a rope round his or her middle. Clergy and servers alike were decently and becomingly clad in albs which fell unimpeded to their ankles. (From this you may deduce that I abhor the alb as frock mode, hitched up with as much as 10 inches of leg/trouser/long skirt showing beneath it.)

And the notices were given decently and in order before the service began. This works. Oh dear. I fear my holiday may be coming to an end ...
Posted by Christine McIntosh at 4:59 PM