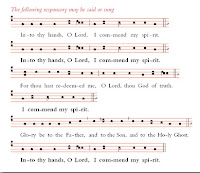 I've referred recently to singing plainsong - though the singing of the example on this Wiki page wouldn't encourage anyone, I fear - which possibly gives me more sense of completeness that any other music, at least in the church setting of much of my own singing. The accompanying illustration comes from the modern setting of Compline, and shows the traditional notation in a clear modern typeface.

I was first drawn to this music in my impressionable youth - before I had anything to do with church other than as a musician. In the late 60s, there was not much of it around, certainly not on the Third Programme, but when I turned up in the summer of 1969 to sing Evensong in The Cathedral of The Isles with the newly-formed St Maura Singers, we had to learn quickly - a new psalm or two, the Magnificat to Tonus Peregrinus - and I had my first go at deciphering neums and four-line staves.

All this was a long time ago, I remember ... anyway, I've sung the psalms and Compline to plain chant over the years since then, and have discovered a thing or two. The first was that I found it easy to read once I had the hang of it, and to work out where the semitones fell (always the pitfall if you don't) and the implications of the interesting groupings of notes (that last link, by the way, gives considerably more detail). But after that, the biggest discovery was the wonderful sense of control, of the line conveying the words without the need for any irritating "interpretation" on my part, of the flexibility when a trained group (or a solo cantor) is able to give slightly different emphasis to one word by lingering infinitesimally on it - all this seemed to me to allow for meditation actually to take place without getting in the way. The pause at the central colon in the psalms turned out to be just right for the breath required for the second half, and the antiphonal singing allowed for the smooth flow from one verse to the next, without worry, without the need for any mnemonic. It felt relaxed and prayerful.

It isn't always thus. People can sing this stuff without any feeling for it at all and ruin the effect. Sometimes I've heard plainchant that might as well be someone selling coal in the street (they don't, any more, but I recall the cry of "coaaaaaal briquettes" from my youth). However, the same goes for any music, and there are murderous performances to be heard on the internet any day of the week. But if you're lucky enough to find yourself in a position where you can enjoy the feather on the breath of God that is eloquent plain chant, or better still to take part in making it happen, you'll know what music you'll hear in at least one of the many mansions of heaven.
Posted by Christine McIntosh at 1:23 PM