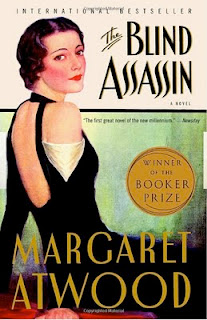 Another blog post, another novel. It's not that I've been devouring fiction more than usual, more a failure to blog that brings this about. I began Margaret Atwood's The Blind Assassin before I went to France - a mistake, as it is a fat book and not mine own, so I didn't want to stuff it into my flight bag. I had just begun to feel at home in the complexities of the tale when I left, and it took me a while to get back into it, for there are different voices narrating the components of Iris and Laura Chase's life together and I was, frankly, confused.

I think it was the effort required that initially put me off reading a book that's sat on the bookshelf for long enough to acquire a sun-tanned lower half (sorry, Morgane) - but it was self-disgust that kept me at it this time. I don't want to subsist on Mills & Boone in my declining years, after all ...

Iris Chase is remembering, as her body ages and her heart gives warnings of mortality. She is recalling the circumstances of her younger sister's death, and in doing this tells the story of their childhood together and their adult fates. As Iris is now old, the story covers much of the twentieth century - wars happen and mark the novel's protagonists, political events hinder their aspirations, society changes and with it their own lives.

The blind assassin of the title appears in the strange fiction that runs through the novel - much as the odd story of the sorcerer in Oranges are not the Only Fruit - but seems to seep out into reality as Laura Chase suffers in real life only to survive as a legend. Newspaper items surface as a contemporary commentary on Iris' memories, and Atwood's mastery of tense and person, of location and mood, pervades the whole, as it did in Alias Grace. I feel I've had an introduction to two centuries of Canada after these two books - and want to re-read the classics I read twenty years ago to check on what I found there.

Another holiday book for when you know you won't be disturbed - a book to chew rather than to swallow, and deeply satisfying.
Posted by Christine McIntosh at 1:05 PM