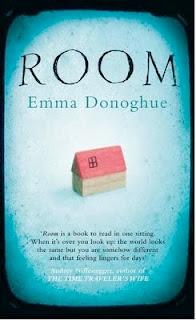 I've always had a difficulty with books entirely written in a voice with which I'm uneasy. I never managed, for example, to read The Color Purple all the way through, because the narrator's English was so heavily Deep-South that the spelling of it gave me a headache. I managed with Sunset Song, but that is a masterpiece. And I managed with Room, by Emma Donoghue, although I nearly gave up after the first ten pages. And maybe the fact that I didn't points to the masterly handling that makes this book extraordinary.

We all read in horror, watch the news with unbelieving avidity, when a story breaks of someone held hostage, sexually abused, exploited, and then, miraculously, discovered and liberated. We unite in condemnation of the abusers, and wonder at the shadowy figures of their victims - but we don't often think about the effect on their lives of what they've been through. They're free, and we thank God, or the police, and move on.

This novel forces you to stay in captivity, physical and mental. It is told by Jack, who is five and was born in the room where he lives with his mother, Ma. He watches carefully regulated television, but the rest of his experience is of the confined space in which they live - a space where the beeps of the security lock on the door herald the nightly visits of Old Nick, the provider of Sunday Treats and the abuser of his mother - and Jack's father. The five-year-old's perception of what he experiences means that for a while after reading the book you too start seeing things differently, and even when he is able to experience Outside for the first time he has his own particular interpretation of what he finds there.

Jack is a captivating and fascinating narrator who has no judgement to pass on his prison because it is all that he knows. By the time he cuts off his long hair and finds that he still has the strength to cope with the world, we too have developed a changed perspective of our lives.

A book group would have a ball with this disturbing and engrossing novel.
Posted by Christine McIntosh at 8:54 PM