Fragmentation capured in a first novel 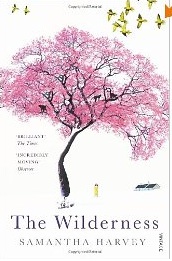 Writing on Shakespeare's birthday, I'm tempted to report that my withers are wrung by Samantha Harvey's The Wilderness.  This is a first novel, and it's masterful. From the opening section, written in the present tense, the confusion that so tellingly mirrors the state of Jake's mind began to seep into my understanding of what was happening: is Henry really in that prison? and why was Helen slumped at the kitchen table?

Jake is suffering from Alzheimer's, the condition progressing as does the novel. His story unfolds in a series of episodes, and if I were sitting down to do a study of it - as I might have had I still been teaching, for example - I would confirm for myself the precise uses of past and present tense: I suspect the sections in the past are reliable and rationally perceived while the present is used for the increasingly random impressions conjured up by Jake's disintegrating brain.

Harvey captures convincingly the struggle of the early moments of disease - the strategies adopted to disguise or foil its depredations, the ease with which others can cope with something that is filling the sufferer with dismay. The story goes on its fragmented way, some moments recurring while others open up aspects of the mysteries of life and relationships, until we reach what feels securely like the present - only to find that Jake has almost disappeared.

I can't say I enjoyed this book. It was too disturbing for that - too threatening of the glib reassurances we give ourselves. The writer is in her 30s, and I marvel at the depth of her imagination and - presumably - research. I don't know that I could bear to write such a novel at the age I am now.

But I'm glad to have read it.
Posted by Christine McIntosh at 2:09 PM