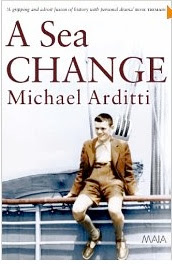 I became acquainted with the writing of Michael Arditti through the meticulous and often hilarious Easter, and wishlisted his rite-of-passage novel A Sea Change on the strength of that. Perhaps my reading of Jubilate - and the ensuing comment-fest on that post - might have prevented me from continuing optimism, but I'm glad it didn't.

A Sea Change is a fictional story grafted onto history: the story of the SS St Louis, a German liner that left Hamburg in May 1939 carrying 900 Jewish refugees fleeing Nazi Germany after years of persecution and the terrors of Kristallnacht. During the voyage, 15 year old Karl grows up, becoming a man despite his earlier defiant refusal to be Bar Mitzvah. His perception of the events leading up to the sea journey is convincingly self-obsessed; we learn his ambivalent attitude to his family and their past even before they all set sail and witness how he manages to reconcile much of the turmoil within himself even as the world around him becomes more threatening.

The story is told by Karl himself, recalling the events when he himself is an old man addressing his own grandchildren - so we never worry that he will not survive the voyage or its aftermath. In a way that focusses us on the plight of all the ordinary - and extraordinary - Jewish families on board; we are never reminded that this is fiction but carry instead the burden of the knowledge of the book's truth. I was fascinated by the attitudes of different characters to Jewishness, tradition and each other, and by the feeling of helplessness brought when money and previous status count for less than nothing.

So why do I still feel slightly cheated? Is it the tendency to long-windedness that creeps into the writing? The slightly banal over-description that I feel needs the pen of a good editor? After all, it's not as if the author is replicating the thought-process of a 15 year old: the 70+ year-old Karl is an academic who is, presumably, capable of sophisticated thought and writing even if he is doing it for his grandchildren. Is it the rather careful punctuation of over-long sentences in what should be a more rapidly-moving narrative? (This sounds odd, coming from a pedant like me.) I'm not sure. But this gave me a fascinating glimpse into a corner of the past of which I knew only a little, into the practices of Judaism, into the relationship with ordinary Germans as well as Nazis, and into the dehumanisation of a people which is the necessary precursor to abuse.
Posted by Christine McIntosh at 12:12 AM