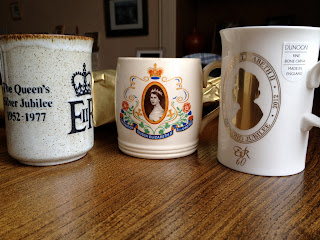 I wouldn't describe myself as a royalist. Nor do I collect china - I've never even owned a display cabinet, something I feel marks me out as one who has not yet arrived. But the other day I nipped into the local Dunoon Ceramics shop (where the mugs are cheaper than elsewhere) and bought the mug on the right, the gold and white job celebrating the Queen's Jubilee. Why? Because it struck me that, together with the other two in the picture, it might some day be of interest, if not value, to my afterbears. So in a sense, this post is for the attention of my sons, lest in a moment of impatience when I/we are no longer around, they chuck the entire contents of the cupboard in the hall into a skip.

I don't know if there were mugs commemorating the Silver Jubilee - probably they exist. I don't have one. I only had sons at the time, and no mini-afterbears to inherit. But the other two are of interest. The one on the left is an early example of the kind of thing Dunoon Ceramics turned out in their early days. The factory arrived in Dunoon in the same year as we did - 1974 - and turned out thick stoneware mugs and pots, seconds of which sold in The Pot Shop for much less than the perfect articles. I think the Silver Jubilee mug is an obvious second - you can see the imperfections in the glaze, and the handle has some odd chips. It might, of course, have been one of the slung mugs in Mr B's 1977 performance of Britten's Noye's Fludde, in which case it's had a hard life. I don't think I've ever drunk from it.

The Coronation mug, on the other hand, actually bears the marks on the glaze made by my teeth over many years. I think this one came free with the labels from several tins of drinking chocolate. I was seven, and it came to me at the same time as I lost my tonsils, just before the Coronation in 1953. In fact, Coronation Day was the first time I was allowed out of the house after the operation, when we all crammed into the flat below ours to watch the only television in the close. This was where Sanchia Peilou the harpist lived, and we sat surrounded by four concert harps in her elegant Hyndland drawing room which rather dwarfed the television screen at the end opposite the bay windows. The adults drank whatever it was adults drank on these occasions, and there were canapés that tasted odd to me, though I may have been tasting with a distempered appetite at the time.

Anyway, there they are. More curious than valuable, they might amuse some day.
Posted by Christine McIntosh at 4:30 PM