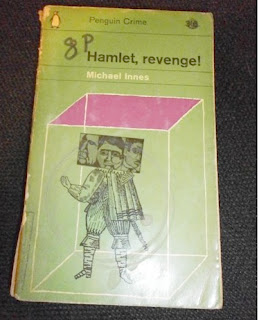 I was interested to see that at least one person had offered on Amazon the very copy of Michael Innes's Hamlet, Revenge that I have just finished reading for the first time since my teens. I first read the book - this copy of the book - when I had just been studying Hamlet for the first time, in school - for we all know Shakespeare wrote the play for Higher English students - and was firmly in its grip, to the extent of learning soliloquies off by heart because I wanted, in some way, to own the words. I have a feeling, in fact, that this would be the very first Michael Innes I read, having recently embarked on my parents' shelves of Edmund Crispin and realised the joy of the green Penguin.

I'd like to look briefly at some of the things about this old favourite that caught my attention this time round. I was pretty certain I remembered who had committed the murder, though not how or why, though there were big tracts of the detection that had escaped me. And I noted that this, like the later A Private View, is a proper detective novel as distinct from the crazier fantasies that I've previously reviewed. I have a horrid feeling that I prefer the fantasy, and have tended to become bored by the minutiae of detection presented in the more traditional examples of the genre, but I'm justifying the frivolity of my current reading matter by paying proper attention to it - should I really be thinking of a PhD in the subject?

But I digress. What actually struck me most is the realisation that I used to feel quite comfortable with the social distinctions underlined in these books - whether among the toffs at Scamnum Court or the academics at Oxford; whether poking fun at foreigners or caricaturing Scots and their way of life. Now  the word most commonly used to describe a black man leaps out of the page and the fact that it is actually being applied to an Indian academic seems doubly odd, and the affable quiddities of the Duke of Horton seem anachronistic and not to be indulged. There is the threat of the impending war (Hamlet, Revenge was first published in 1937) and there are no mobile phones. In fact, much detective fiction would not exist in its original form, it seems to me, if mobile communications had been available - when Appleby, now an Assistant Commissioner of Police, embarks on a foolhardy solo venture in A Private View, a phone in his pocket would have ended the whole escapade before it got under way.

But I am still entertained. The language is beautifully precise and stimulating - did readers of detective fiction simply have more erudition half a century ago? (or more, dammit - or more!) Or is it like Shakespeare, now the preserve of an elite but once much more widely enjoyed? Did readers read and non-readers toil merely? I am in a world that comforts strangely, despite the murders and the fogs. Perhaps it is just that it is the world in which I was young - for the fifties are a far-off land nowadays - the world in which my well-read parents provided an endless supply of reading matter to a voracious child, where escape from whatever small ills might afflict me was within reach whenever I chose to take refuge in it. (I still remember my father denying knowledge of where I was when small friends came to the door asking 'can Christine come out to play': did he know, I wonder, that I was deep in a book?)

Yes, I am still entertained. But I grow a-weary of the smell of old, yellowing paper ...
Posted by Christine McIntosh at 4:07 PM