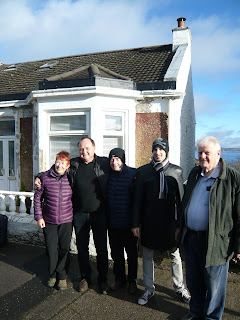 Not long after our return from Russia we found ourselves once more hosting a visit to Dunoon from the vocal ensemble Voskresenije from St Petersburg. Having done this annually for several years, the vestry of Holy Trinity decided that it was too difficult to attract a capacity audience every year, and we switched to hosting a concert every two years. Because of new regulations governing the use of buildings for concerts and so on, we were moved by the looless state* of HT and the cost of hiring portaloos to use the Burgh Hall. This itself is very much a work in progress, but is a building well-provided with loos and rooms in which choristers can eat and change, and on this occasion was able to offer a bar at the back of the hall. All seemed set for an interesting evening; the hospitality for the night after the gig was all set up; the posters had been printed. I should have known better.

It has got around that I have been organising Voskresenije's concerts here - and elsewhere, at times - for quite a time. And so it came about that, the evening after our return from Moscow, I had a phone call from the organiser of the concert the night before the choir were due to come here. To cut a long and tortuous story short, he'd had to cancel - and the choir were already on tour. This is catastrophic for them - it amounts to about £1000 out of pocket for them, what with finding alternative accommodation (for that too hadn't materialised) and losing income from a gig. I was appalled, and I was furious. I found myself saying "send them here." I didn't know how my hosts were going to react, and for two days I sat on the news, plucking up the courage to ask them if they could cope.

They coped, magnificently. To a man and a woman they were horrified at the behaviour of the church that had treated "our" Russians so cavalierly. They met the minibus in a dark car-park, were allocated their guests by Jurij (the MD) and set off into the night. It could all have gone so wrong, but despite the odd tremor about a dog or two, it ended up going swimmingly. Or singingly. Laundry was done, singers went for dog-walks in the dark along the shore, my friends Michael and Charlie decided they could speak Russian after downloading Google Translate and finding it worked. The concert was a joyful sell-out, and though HT has a better acoustic and more atmosphere, people on the whole appreciated the convenience(s) and the bar.

As you can see from the photo above, they left in great good humour. That's Jurij between me and Mr B, with a young tenor/counter-tenor and one of the hosts - who memorably opined that we should have them for two nights every time as it gave us time for chat. And despite the fact that I was dying from a cold I felt exhilarated as well as exhausted. What seemed like a mountain to climb had once again become a dawdle.

But there's a moral to this tale. Hosting a choir like this is rewarding in all sorts of ways, and I would commend it to any community (it's usually churches who do it). But if you decide it's something you'd like to happen, you have to make it work. If you're uncertain or unwilling to meet the challenges the organisation can throw up, don't embark on it. That church - about an hour's journey away, on the other side of the Clyde, solid, middle-class - behaved abysmally. I'd hate to think of it ever happening again.

Holy Trinity Dunoon, on the other hand ...

*HT may not remain looless for ever. There are plans afoot - or abottom, if you like.
Posted by Christine McIntosh at 4:52 PM