Readers of this blog will know that I've been dabbling in my family tree - can one dabble in a tree? 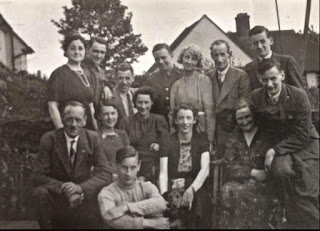 It was this photo that clinched the knowledge that the families I'd been trying to link were indeed the one extended family. This came from a tweet from the cousin I've been pestering for the past year, intermittently, with suggestions about various relatives and dates, and when I looked carefully - i.e. not on my phone screen - I recognised faces. I hope he doesn't mind me sharing it further, with my part of the family as it were ...

The first face I recognised was that of the young man in uniform in the middle of the back row. He was my uncle, my mother's wee brother. I didn't notice right away, but I'm convinced the woman second left on the front row is his sister, my aunt. But the face I saw next was the woman standing beside my uniformed uncle - and then the man beside her. My Great-aunt Chrissie, and her English husband Jack Smith. That tilt of the head - those ears ...

And then I went burrowing and found this photo in a box, a nice, clear photo taken by my father. 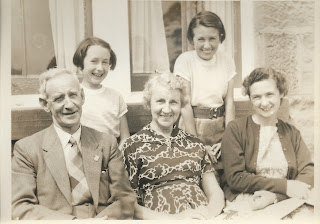 Recognise the same couple? This was taken in 1958, in Arran, outside the house we rented every summer, and I remember the day they came to visit - presumably because we were there for the whole 8 weeks of the school holidays when they had paid a visit to Scotland, travelling from Letchworth where they lived. And yes, that's me in the photo, with a dire hairstyle - it took me a while to find what to do with short hair after my pigtails came off; I owed, I fear, a debt to Helen Shapiro for several years thereafter.

But how strange that it should be Aunt Chrissie, someone we rarely saw, who should be so immediately recognisable. My grandfather's sister, whose voice I remember as being wonderfully deep - a family trait. I can remember her telling her husband to go and keep my father company when he went outside on this day, worn out by hours of family gossip, seeking solitude: how we laughed! He always joked ruefully about how this same Aunt Chrissie told him that when he married my mother he became her 57th relative; for the rest of his life he referred to my mother's family as the Heinz 57 varieties.

So that's today's excitement. This genealogy malarky can become engrossing - and hugely time-consuming.

Posted by Christine McIntosh at 8:56 PM