No scones, no stereotypes 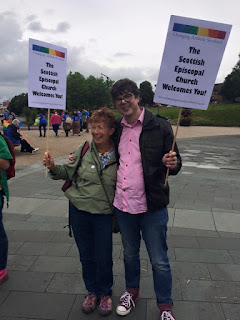 I found myself thinking about Mission in church yesterday. I suspect something in the sermon triggered such thoughts, and the reflection that the word tends to make me uncomfortable. I have never been able to contemplate standing on a street corner with a sweet smile and a bible in my hand, nor picture myself chapping on doors to ask the bemused inmates whether or not they're saved; I'm not the kind of person who invites neighbours round for tea and scones because I don't bake, much, don't eat scones, and drink tea that makes most people turn up their noses. So there's never been an area, especially since I stopped teaching, where much mission seemed a possibility. (Note: I never tried to indoctrinate my little charges; there's just so much Christian background to our literature that it was easy to hold it out, as one might a visiting card...) 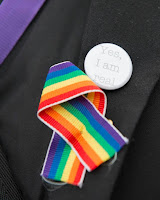 But yesterday I realised that I'd been indulging in a spot of Mission (with a capital M) on Saturday. Yes, it was on the initiative of Provost Kelvin and his pals in St Mary's Cathedral, but there I was walking through the streets of my native city, in the middle of the Pride parade, holding aloft a placard saying "The Episcopal Church Welcomes You". And as I've remarked already, people clocked this, pointed out the placards and the big plastic banner (quite heavy after an hour) and took photos of us and - on more than one occasion - gave us the thumbs-up.

The surprise element in Mission. That's what was up on Saturday, and what used to work, I felt, when I was teaching. It was underlined by Kelvin's wee badge: Yes, I am real. Not for me the polite presence behind a tea-table or the lone voice on the doorstep - because both would put me off religion for a start. Mission as the unexpected presence, the assertion that one can be a Christian and not conform to stereotypes - that's where I belong.

Posted by Christine McIntosh at 3:44 PM