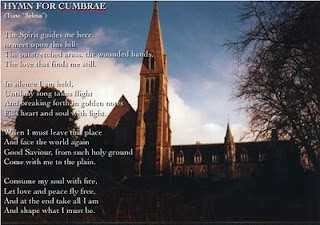 I've been writing poems for a while now, and it's some years since I was asked to write a hymn to celebrate 150 years of the Cathedral of the Isles on Cumbrae. Writing a hymn is a strange exercise - the kind of poems I normally write do not immediately inspire bursting into song. I chose to do it on the back of a tune I love and which we only sing at Harvest Festivals: Selma is a traditional tune from the island of Arran just across the firth from Cumbrae and in the English Hymnal is used for "Fair waved the golden corn".

Some years later I had it superimposed on a photo by Rob Tennent and made into a postcard which is still sold on the bookstall in the College. Today I heard of how one of these postcards had been sent to a retired cleric who in turn had passed it to someone else who had set it to music for six voices. My informant obviously thought I'd be pleased. But I'm not. Why?

Well, quite simply, I'd have liked to be asked. The back of the card clearly states the authorship of the words - though I note that in my naivete at the time I didn't include a © symbol. But what is it about people - especially, I think, church people - which makes it somehow all right to play around with other people's intellectual property? And the fact that I'd chosen to couple it with a tune and made this clear on the card just makes it more irritating.

I'm now away to do a bit of stable-door-closing, in that I shall post the two card poems written for Cumbrae on frankenstina, where they will at least have the benefit of my Creative Commons licence. And I may yet get round to contacting this composer and point out his lack of courtesy.

Meanwhile, I just hope it's decent music. If not, I shall point that out too.
Posted by Christine McIntosh at 6:19 PM