Paddling up the Thames 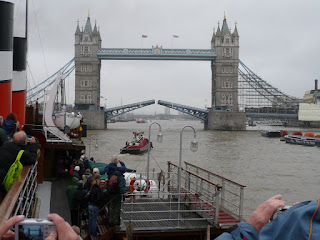 Just back from London, I crossed the Firth this evening in the Aly Cat, bouncing about in a grey swell as the rain battered the windows. Familiar territory. But yesterday I enjoyed a surreal mix of the familiar and the new, as we sailed on the Waverley from Tilbury to Tower Bridge and back again.

The familiar? The weather for a start: grey and chilly with a hint of rain. The bobble hats and anoraks. The determination on the part of the passengers not to be driven below until hypothermia set in or their hands became too cold to hold the camera. And the ship herself, the varnished wood and gleaming brasswork and the smells of the engine and the accents of the crew. But unfamiliar? The bobble hats were worn by people with London accents, hordes of them, and the bar had children in it and most of the men there were drinking beer, not whisky. The river was the Thames, and instead of the Kyles of Bute we had the spectacle of Tower Bridge being fully opened for us - and all the traffic backed up for miles and the river bank lined with crowds waving and taking photos. It was quite an experience.

The pic shows the tug which turned us just upriver from the bridge, which is just opening for our return journey. As we passed under the towers, we were exhorted to cheer, and the ship's whistle blasted steamily. By the time we had gone back downriver to Tilbury, under the Dartford Bridge (and simultaneously over the tunnel) it was growing dark, though I don't think that was the reason for the mighty thud we gave the clearly disintegrating pier. Maybe the wifie in the yellow jacket who looked as if she should be catching the rope thrown for the deck knew something - but she just stood there as the chorus of jeers sang out from the crowds waiting to disembark.

A great afternoon. Surreal, but great.
Posted by Christine McIntosh at 10:12 PM