Reflecting on a link 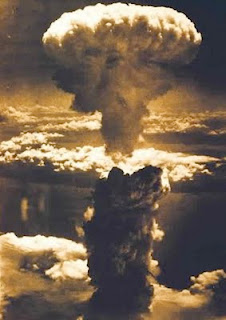 I've been thinking about the most recent of the Letters from the Past, in which my father introduces the subject of the bomb dropped two days previously on Hiroshima. Two things struck me simultaneously: the fact that the bomb took fifth place, coming after my mother's health (she was only seven weeks off having me), the weather, the imminent demobilisation of a teacher colleague and the possible timing of his own; and the statement that he finds the news of this bomb "extremely depressing" - even though it will shorten the war and his own incarceration in the RAF.

It also interests me that he should be so ready to link the invention and use of such a weapon with the tenets of conventional religious belief - and saddens me that I never thought of discussing such matters with him. I was, of course, too young, too selfishly caught up in my own life, too ignorant of politics, religion or indeed practically anything at all serious - too much of a child, even at the age of 32, to talk to him about anything that mattered. (He died when I was 32.) I now like to think that he would have approved of my activities in the '80s, marching with CND, making speeches, appearing on radio and several TV programmes, and that his assertion that I had "thrown reason out of the window" when I told him that I intended to be confirmed in the Episcopal Church after rejecting religion for the previous ten years would have been tempered by the struggles I had with that same church over my political activities.

Putting these letters online has been a fascinating experience, and the letters of August 1945 are the ones that inspired me to do it in the first place. Often I catch myself thinking they have been written to me - and then I see a speculative reference to my as yet unborn self and smile. But primarily their interest to others will lie in the authentic voice of a highly articulate and educated man of the time, expressing casually but succinctly what must have been in the minds of many like him. They come to an end in just over a month's time. I shall miss him...
Posted by Christine McIntosh at 3:04 PM