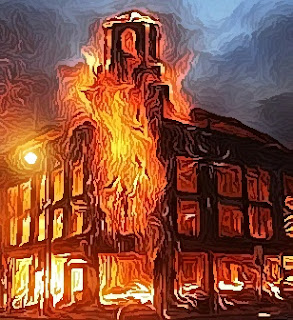 When I was very small, I used to lie awake in the light summer evenings and dread the arrival overhead of the 8pm flight from Paris into Renfrew airport. As it roared above our top flat, I imagined the horror of a bomb falling from it onto my little bedroom (originally the maid's room in the early days of the building) and visualise the heavy sandstone block between the windows tilting and toppling into the back green. The war was a recent memory and stories of the bombing were still sufficiently commonplace for small children with big ears to pick up enough detail to terrify.

Now, living in the peace of Argyll, I visualise bits of London I know - like Croydon - ravaged by fire and anger. I think of the daytime activity of clearing up, in defiance of the possibility that night will bring more destruction. Last night I read the tweeted commentary of people in London and elsewhere, and realised from the responses of some of my contacts that there was a great tide of immoderate comment that was passing me by. Suggestions about dealing with the riots ranged from the sensible to the homicidal; reactions to these from the shocked to the angry.

And what business have I to comment? Here we have cool, fresh evenings in beautiful surroundings, and I live a comfortable, cushioned life in which the noise from the pubs coming out irritates rather than threatens. As someone who has taken part in demos and sung at police lines and learned how to remain safe during NVDA* I know how it is possible to demonise the forces of the law - but there's where the comparison ends. Last night I watched a report on YouTube by an incredibly brave guy in Clapham who was asking looters if they were proud of what they were doing as they looted the shops of electrical appliances (they left the bookshop alone, natch). "What's that about?" he asked. And on Twitter people demanded draconian clamp-downs that others said would make things worse; some offered to pray for London and others felt patronised by the offer;  some seemed intent on appearing cool whatever happened.

Do I have a take on it? I don't know. I suspect that if I were living in the middle of it all I would be forgetting all my liberal instincts as fear took over - fear for my safety, for my property, for my livelihood. As it is, I worry about family and friends and am glad to hear they're ok. I look at angry youths being bestial and defensive women nicking tellies and I'm not surprised to see police wielding batons with a will. Fear and rage are powerful emotions and once things get going reason goes out of the window. So no, I don't know what I think, other than that it's hellish and I'm sorry for anyone who has to live with it. I'll stick right now with the wisdom of a two year old boy who saw the TV news this morning: "People are being very naughty."

Quite the most balanced response I've heard so far.

*NVDA: non-violent direct action
Posted by Christine McIntosh at 11:11 AM