Does the pic above stir a flood of memories, dear reader? If it does, I fear you may be approaching the sere, the yellow leaf, as I am ... but let's have another wee wallow in the 50s, huh? For some reason I cannot fathom, I bethought me the other evening (what has happened to me? Shakepeareitis?) of the days when I used to collect scraps and, in the appointed season, to exchange them with other small girls in a highly ritualised form and always in the same place.

If you don't know what I'm talking about, I have to explain that Googling "scraps" tends to take you to strange places; "die-cut scraps" provides more information. And that's what they were - coloured pictures, of all manner of people/animals/flowers, die-cut either into squares (boring) or round the outline of the picture, as in the illustration above. These were sold in sheets, linked as shown, often but not always of the same picture. You carefully took them apart, trimmed the paper tags, and put them into your collection. Strangely, it was more fun to acquire sets of scraps by barter than be simply buying them. You would look out for pictures that you already had an example of - these blooming angels came in many sizes and cloud-colours - and traded your own less precious scraps to acquire them. The most precious of all were "pre-wars" - though now I look at example of Victorian scraps online I wonder which war we were referring to. They were identified by the muted quality of the printing - fewer dpi, I think - and the quaintly old-fashioned subjects, and they were worth any number of scraps bought just last week. 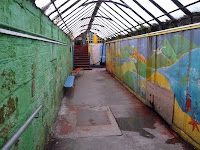 The sacred place for the Scrap Season (remember how there used to be a time for skipping, a time for ball games and a time for scrap swapping?) was the shed of the girls' playground in Hillhead Primary School. Along the wall on the right in this photo, there used to be a bench, and it was there that we sat, usually on wet days, with our scraps in convenient books, one scrap (or set, if you had different sizes of the same scrap) to a page. I had two such books, which I think were old school text books, with cloth covers and plenty of pages. When a potential customer came along, you handed over your own books and took hers; you then leafed through the pages looking at the scraps lying inside and when you found one you wanted, you put it up in the manner of a bookmark. The books were returned, and you then went through the marked scraps, either putting them back inside the book as not being available, or offering them for one you wanted yourself.

I feel sure my books are still lurking somewhere in the midden I call home, but I can picture them now. The top right corner of each page is dark grey with years of spitty fingers, and the books are entirely dog-eared. The Season came and went, and the scraps returned to obscurity until the next year. I don't know what made me think of it, but I have already spent over an hour looking for the collection. I can't see my grandchildren being at all interested, but I can't help wondering if the only people who might collect scraps nowadays will be my age. Take a look here if you're interested.
Posted by Christine McIntosh at 6:42 PM