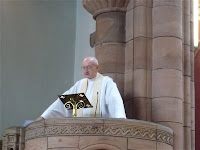 Yesterday the Diocese of Argyll and The Isles had a ball. Not the kilts-and-ballgowns type of ball, but the exuberance of a Diocesan Festival which had all the hallmarks of this diocese at its best. With Bishop Martin as MC, Richard Holloway as the preacher at the Eucharist, and some imaginative planning that gave ownership of all the action to everyone present, it was far and away the best festival I’ve ever attended (and I’ve seen a few, believe me).

The culmination of the event was undoubtedly the Eucharist, but the Singing Workshop which occupied everyone between eating and worshipping was 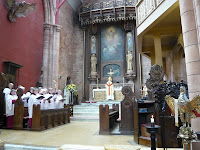 a highpoint for many who had not previously experienced Mr B’s take on singing. With their rib-cages high, two imaginary shopping bags in their hands and their face muscles hooked over their ears, the congregation learned John’s Kilbride Mass and sang it with enthusiasm and accuracy – a congregational choir in the best sense. The Cathedral choirs – from St Johns, and the St Maura singers from Cumbrae - sang their own small offerings, but this was a communal effort and all the better for it.

Bishop Richard preached a powerfully relevant sermon on the flawed, broken people of God, reaching the figure of Columba by way of Graham Greene and Paul Tillich. I don’t know how many of us were as struck as the people around me by the image of those who had broken their own hearts and who were yet afforded grace when they least seemed to expect it, but it would have been worth making the journey just for that moment. And there was a hair-raising prayer in Gaelic, and a beautiful Gaelic sung meditation which touched us all, even if we had to read the translation.

But the abiding impression of the day was of joyous interaction and friendship, as Bishop, Dean and preacher cracked jokes at/about one another, as the Dean instructed us how best to exchange the Peace when there was the threat of The Plague (you can give a Buddhist bow – Bishop, demonstrate – or a cheesy grin), as we all greeted one another with added enthusiasm as if to make up for the lack of handshaking or were hugged in complete disregard for the possible contamination from Dunoon people. (If you have been on another planet: Dunoon is currently the swine flu capital of Scotland, if the meedja are to be believed).

This was the diocese at its crazy Argyll best. People had travelled absurd distances to be there, including Tim, temporarily relocated to Argyll and at the festival because I tweeted it, and there were 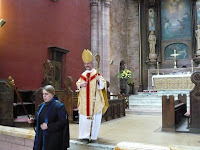 bizarre conversations – Your jacket is from Skye Batiks (mine, and it was) – how do you prepare a sermon? (have a meeting. It makes you feel better) – Is your accent from Hyndland? (mine again. Yes) – have you seen their kitchen-in-a-cupboard? (fabby idea: must copy). We were totally knackered by the time we left, and we still had two hours’ driving before home and dinner. But, for all my misgivings when it was first mooted, I had enjoyed a day in which every moment was filled with what felt right. And for all the problems of this tiny diocese, it was a day when I would have belonged no-where else. Slainte!

Note: you can see more photos from the day here
Posted by Christine McIntosh at 10:47 AM