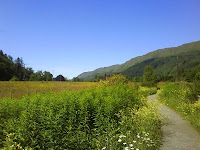 This morning over breakfast I was catching up on an essay in the Sunday Herald on the subject of consumerism. The writer, whose name eludes me at this late hour, was calling for a return to a less demanding lifestyle, where we rediscover the pleasures of the open air, the countryside and so on. He made the point that the pursuit of possessions rules the lives of far too many people today, and repeated the idea that if everyone on earth made the same demands as us in the West, we'd need three planets to sustain us.

I've just had an idyllic day. The weather helped, of course, and we used a car to transport us to the wonderful seaside meadow in the photo - though we could fine have gone on the bus. But the pleasure came from walking in the sunshine among wild flowers, between clumps of sea buckthorn, to the white sand of Ardentinny, and drifting back again after a paddle and a blether (of course). We ignored the nuclear submarine facility on the far shore and concentrated on the heron walking like an aged dominie through the shallows of the outgoing tide, while a blackbird in the tree behind us urged us to go and leave him alone. And it was all free. There wasn't a shop in sight and we didn't have a penny with us - just a bottle of (tap) water.

So the next time I spend money on new walking boots or a new cagoule, I'll remind myself that by so doing I'm saving myself from the further excesses of consumerism. And it would be even cheaper if the sun shone more often as it did today - wouldn't it?
Posted by Christine McIntosh at 11:52 PM