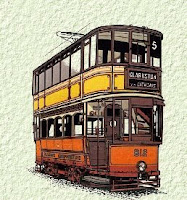 I had a lovely wallow in nostalgia today, courtesy of Bill, who sent me this link to a film of the last day of the Glasgow trams. This was in the early 1960s, but my memories of trams are set in the 50s, when I caught the Number 10 (blue) tram from the terminus at Hyndland Road, along Great Western Road to Hillhead Primary School. I had occasion sometimes to travel on the No. 5 (pictured) though I have a feeling it was less convenient - did it come from Byres Road?

I've been looking at some of the other films flagged up on that site, and was amazed to see how fast some of these old trams were - they fairly rattled along Great Western Road west of Anniesland Cross, where they had the central reservation all to themselves with the lines running in the middle of the grassy area. I can't for the life of me recall how people boarded them there - were the stops in the middle of the road too?

And how quaintly narrow they were - especially the older ones like the one pictured. The seats were so narrow that two adults must have been very squashed; as a skinny child I was always pushed into a corner by anyone sitting on the outside seat. The best place to be, however, was upstairs at the front, where you could shut the door on the small compartment there and - as I did when small - stand at the front window looking out and down at the street, the view completely free of obstruction, and pretend to be driving the tram. The real driver was immediately below you in this position, and could be seen if you peered down the spiral metal staircase which came up into the compartment next to the double, side-facing seat. The rest of the seating was a continuous bench round the curved front of the tram, but if I sat there I would tend to feel sick as the view was intermittent and the angle odd.

And now Edinburgh is grinding to a halt in the effort to reintroduce trams. If I live long enough (that is, I hope, sarcastic) I shall have to ride one, though I doubt if they will be quite as excitingly bereft of any health-and-safety features. I doubt if the fare will be a pink ticket for tuppence, and the Edinburgh clippies probably never said "Come oan, get aff."

And I'd better not try to stand at the front and pretend to drive it. Sadly, I think I'm a bit old.
Posted by Christine McIntosh at 11:41 PM