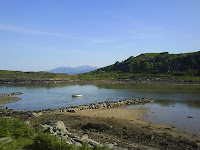 Well, well. Or, if you like: ill, ill. Swine flu has arrived in Dunoon, not in single spies but in battalions. Ok. I exaggerate. 18 Dunoonites do not a battalion make. But it's a fact that Dunoon hit the ten o'clock news tonight in a way it hasn't since the American navy left. It looked lovely, actually - nice shot of Kirn under a Mediterranean sky, the Western Ferry ploughing bravely across bringing reinforcements for the Royal Bank so that it could open again. I was interested to realise the subconscious calculations going on - that queue outside the surgery when I passed this morning: were they ill, or frightened - and did I pass too close to any of them? Shall I do my shopping in Edinburgh this week instead of the over-crowded Co-op in Dunoon? (our other supermarket is closed for renovation)... and so on. And of course there's the hypochondria: is my throat sore? or is it simply hayfever? (the Met Office man with the whimsical manner said the pollen count was affecting him ...)

But actually the weather is too good to worry for long. It's hard to feel threatened when you can spend the afternoon sitting on one of the world's most wonderful beaches, paddling in warm sea as it slides over the hot sand, then exploring a hitherto unknown track and finding the beautiful bay in the photo. The car thermometer - sitting in the sun - read 31º at 6.20pm, and even in the shade it was 23º by the time we were home again. The promised cold air is going to feel arctic on the sunburn, but the S3 pupils who were sent home for a week to prevent the spread of infection have certainly chosen a good time for it.

Except that now they're spreading themselves over Dunoon ......
Posted by Christine McIntosh at 11:48 PM