Being fair to the taxman?

I completed my online tax return the other day. It reduced me to weeping and gnashing of teeth, and it took me all morning and made my lunch late. That's bad. All the years I was employed as a teacher, I only did perhaps a couple of returns before they brought in PAYE, so this assault upon me as a result of doing the self-employed thing came as a cruel awakening.

Part of the cruelty comes in the letter the tax people send you - the ones that tell you to get it done by October if you're filing a paper return, but allow you to the New Year for the online stuff. It arrives in May.  The language is especially minatory, despite their attempts to lighten up by introducing the contractions of an informal register. So: This notice requires you, by law, to send us a tax return ... but you have till three months after the date of this notice if that's earlier. I would disapprove of that, I think, were I to attack it in a professional capacity ... but I digress. The greatest threat is yet to come.

So why am I making all this fuss? (It is the law, after all). Two reasons. The first is that my fellow-teachers and others in PAYE schemes, who never have to deal with their own taxes, might be interested to see what they're missing out on. But secondly, and far more importantly, is the lack of efficiency of the Tax Office.

Mr B got a letter on 9th March, in which HM Revenue and Customs told him that he had underpaid tax. Apparently the SPPA had given them the wrong tax code, and they intended simply to take the money. Several phone calls and letters later, they are still "dealing with it". The most recent phone call was prompted, I may add, by the sight of the letter I had with all these penalties listed for late submission.

Perhaps I am merely being naive. Perhaps in fact HM Revenue and Customs find their tax sums as difficult to deal with as I do. Perhaps we ought to cut them a bit of slack and not expect them to be as efficient as we're expected to be.

But I find myself incapable of such magnanimity. And the worse of it is that I shall now be hounded to my grave by these people, whether I ever work again or not. I'll get back to you on this. As the tax office folk say on the phone - bear with me.
Posted by Christine McIntosh at 1:15 PM 1 comment: 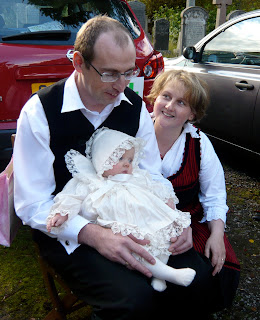 Later: I was waiting to retrieve a photo for this post, and somehow it's arrived here after midnight. I've not gone crazy - just think Tuesday rather than Wednesday for the posting date!
Posted by Christine McIntosh at 12:07 AM No comments:

How strange life feels when you put everything on hold. Right now, I should be somewhere in the air above Europe, en route for a walking holiday in Sicily. Instead, I am sitting like an Edwardian duchess on a hard chair blogging through a drug-induced haze. I'm not even at church this sunny morning, as we shall be there this afternoon celebrating a baptism and a blessing as well as the Eucharist.

And all because of an afternoon's weeding. Two weeks ago today I engaged in a fairly ladylike fashion with the weeds sprouting among the white stones that are supposed to be a decorative feature of our front garden. They are devastating on the knees if you kneel down, so I didn't. I walked over the stones, bending from the waist.

After a week of ruefully admitting that I had a sore back, I took myself to the GP. And went back two days later. And made myself ill with one lethally effective painkiller, saw a wonderful physiotherapist, went back to the GP and had an Xray. Finally - or maybe not - I had an NHS24-arranged visit from an out-of-hours doctor when I had spent an entire night sitting up playing bubbles on the iMac and feeling sorry for myself.

And here I am. I've turned into a Zombie. I'm told they're frightfully in these days. I find myself relieved that I'm not crammed into a tourist flight, not about to spend a week in a hard Sicilian bed, not having to be cheerful when I feel glazed. I shall be able to recover my ailing iMac a week earlier than planned, and I shall be glad to see my friends Csaba and Melinda celebrate their baby and their already wonderful marriage.

Are these, then, the silver linings to this particular cloud? Perhaps. But we shall have that holiday in Sicily. Just let me get my back sorted ...

- Posted using BlogPress from my iPad

Posted by Christine McIntosh at 11:01 AM 4 comments:

What a brilliant app the Poetry Foundation one is! I downloaded it on my iPad a few weeks ago at the suggestion of Ewan McIntosh, and on this grey morning I've been indulging myself in having a spin among the poems - hundreds of them.

The format reminds me of the games we used to play with these little folded bits of paper that I never know how to fold to make them fit on the forefingers and thumbs so that a few movements would tell you your fortune - or whatever. Only this is much more sophisticated. Two 'wheels' of concepts at the top of the screen can be individually spun, so that one spin might bring you "optimism and spirituality" and another "love and grief". For each combination there appears, instantly, a list of poems - in some cases over a hundred titles - and at a touch, the chosen poem is there on the screen.

You can add any poem you particularly like to your favourites, and the complete accessibility of the resources makes the app a joy to use.

When I left my last teaching job, I wondered fleetingly where I would find the sudden surprises that browsing through the latest anthology to arrive in the department could bring. Now I wonder no more. I shall never reach the end of this trove of treasure.


- Posted using BlogPress from my iPad
Posted by Christine McIntosh at 11:08 AM No comments:

Health update on a Mac

The blog's gone a bit quiet recently, I know. Partly it's been my need to keep up with my father's Letters from the Past - there have been quite a few recently, and I'm trying to keep them to the dates on which they were written 66 years ago. Soon he will go on leave to attend my birth, and the strange journey will be over. There are no letters kept from the time after that - I suspect my mother my have had her hands full in the months till my father's demobilisation, and the wonderfully evocative letters which the ones I have hint at perhaps dried up - or were replaced by phone calls. I don't know, but I shall miss them.

But another reason for my unblogging is the fact that my desktop iMac has ... well, died. It's been staggering a bit for some weeks now, but I was managing to cajole it along with frequent emptying of the cache and so on. Yesterday, however, it turned up its toes and wouldn't let me past the sign-in stage. It's going to the doctor in the Apple Store this week - just in time before my Apple Care runs out - and I shall be able to report on the experience.

Meanwhile I am relying on the laptop I bought (a PowerBook G4) when I retired six years ago. This blog began on the laptop, and I used to feel totally at home on it. Now, however, the screen feels small and dim and the angle on my desk is all wrong (though it is crammed in front of the iMac) and I keep reaching for a mouse. The fan keeps whirring alarmingly, and as I type I'm aware that what is on the screen isn't keeping up with my flying fingers. The various apps tend to be out of date and there are too many things I can't use. Worst of all, I had promised myself that this would be the week I would do my tax return. Last year's stuff is all ... on the sick machine. I can't bear to start on this one. I shall procrastinate further.

And before you ask: yes, it's all backed up.