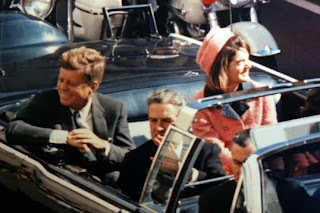 Well of course I remember. I was eighteen, for God’s sake. Impressionable, emotional, in love with too many people to enumerate - including the President of the United States. John F. Kennedy was everything our politicians weren’t - think of the ancient Harold McMillan, his successor Alec Douglas-Home and before them Eden and the antique Churchill. Ok, the forty-something Harold Wilson had just won an election, but with his Gannex and his pipe and his portly waistcoat he was never an icon and seemed never to have been young. So yes, I remember where I was and what I was doing when I heard Kennedy had been shot, that strange dark November evening and the weekend that followed it.

It was a Friday, so whatever the dates fall on it will always be Friday in my memory. I was late home from school - orchestra practice ran till after 5pm on Friday evenings, and then we had to get a bus home - and my sister and I had our evening meal alone as our parents prepared to go out for the evening. Strange, that - they so rarely went out on the razzle. We had no television - my father thought, probably rightly, that we’d never do any homework again if we had one. It was our habit of a Friday evening to walk round to our grandmother’s house to spend the evening watching Russ Conway and other shows (our grandmother was strangely engaged by boxing matches) and eating cakes at suppertime. It was dark, of course, and the streets were quiet as we made the 10 minute walk.

I remember my aunt coming to the door and telling us the telly was off. Something had happened, and there would be no Russ Conway show that evening. Sure enough, there it was - the globe turning on its black background. There may have been music - that I don’t recall. Some time after our arrival, the news came on, accompanied by the by now familiar scratchy images of the motorcade, of Jackie Kennedy apparently trying to climb out of the car, of the agent leaping up behind her. Were they trying to hold hands? It was all very confusing and no-one was telling us more than we could see. The dislocation of time and weather - it was one of these made-for-tragedy sunny days in Texas - made it seem unreal, or at least removed in the way old war footage was.

I kept a daily diary in these days. Hell mend it, I still do. But when I looked it up the other day, I could see only the bald fact, recorded almost as an afterthought on a busy and self-absorbed Friday. (I know now, with hindsight, that I am incapable of recording the big life-events in anything other than the baldest of prose in my diary - the poetry comes later, when feeling becomes possible). “President Kennedy of the US was assassinated about 7pm our time in Dallas, Texas. He was shot through the head and died 3/4 hour later”. The next day’s diary records that I couldn’t stop thinking about it - “it’s terrible”. But then I went to see “From Russia with Love” and cheered up, apparently.

In a way, I was more reflective after the absurd - for it seemed absurd even then - shooting of Lee Harvey Oswald by Jack Ruby. I think I perhaps saw that live on TV (another visit to Grandmother; she must have wondered what hit her). I recorded that there was speculation that Oswald had actually been shooting at “the other man in the car” (Governor John Connally) - haven’t heard that one since. By the time we reached Monday morning, I had worked myself into such a state of generalised angst that I felt like throwing up and didn’t go out to school until halfway through the morning - the images from the papers, Jackie Kennedy in what at that time I thought of as a grey skirt splattered in black blood, the knowledge that the funeral would follow later that day (why on earth was it so soon?) - all these had an impact that I wonder at now, when we expect movie-quality disasters on tap, immediately.

Looking back, I realise that the events of that day remained monochrome and censored for a long time. It was years later that we saw bits of the Zapruder tape, and later still that horrific moment when Kennedy’s head exploded in a pink cloud. The theories multiplied and became as much of the history as the event itself, and the world moved on and Bobby Kennedy was shot and Gerald Ford was shot at and so was Ronald Reagan and Pope John Paul and the twin towers fell and I grew older and less impressionable. Maybe.


But when they ask that question - Do you remember what you were doing when Kennedy was shot? - I can relive it in a flash. Oh yes. I remember.
Posted by Christine McIntosh at 6:49 PM 2 comments:

Reflections on a life-long process

A discussion this afternoon as we walked down the Bishop's Glen under a miraculously cleared sky had me thinking. Not, on this occasion, of how cold my head had become - it was, we discovered, only 1ºC - nor of how lucky we were to have hiked for over an hour without getting wet, but about education. Again.

Thing is, when you spend 17 years of your first quarter-century in formal education, and the best part of your adult life involved in imparting the fruits of your learning to others, it's hard to retire the bit of your brain that thinks about such matters. And I keep reading blog posts that make me remember and reflect, and then I find I have to discharge these reflections to make room for more development. This particular outpouring, actually, also has its genesis in the English grammar test that was doing the rounds on Facebook last week; I was amused to see that among my circles I and one other judged the test by our 100% scores rather than the other way round.

So I can write correct English by the standards of the past century. I know my subjects and my objects, I recognise errant apostrophes and misrelated participles (all wildly common these days), I tend not to split my infinitives despite the mootness of the imperative that dictates such niceness. And yes, I know how to use "nice" correctly. But why? And how did this come to be?

Of course, it's a process. A lifelong process that began when I learned to read before I started Primary School, continued through the reading before I was 10 of books like "Treasure Island", Whymper's "Scrambles amongst the Alps" and the historical novels of Conan Doyle, was underlined by regular lessons and exercises in analysis and parsing all through primary school and into S1 and S2 and culminated - I suppose - in the mastery of Latin grammar at secondary school and university. I was taught from first Infants by teachers who were graduates - as far as I can remember, they all turned up in Glasgow MA hoods at special occasions - and who seemed possessed of infinite knowledge. (Here I have to single out the unfortunate BSc who took over my class in P7 - he struggled dreadfully with the English homework he set us, and had to seek help from my father, an old acquaintance from University.)

When I think about it, I can't remember ever not knowing how to write correctly - given, of course, that I was of an age to be literate. I couldn't always spell, and still have words that I like to check - but they're few and far between. I used to use "like" as a conjunction in careless speech, and may sometimes still do so, but I can hear my father's voice telling me not to. At dinner, God help me. Did such knowledge make me a good English teacher? Of course it didn't. But it made me a confident one. I didn't worry about the things I didn't know, because I could underpin everything I considered with a solid foundation. I never minded having to check something, or ask the class what they took from a text, because I enjoyed the stimulus of doing new stuff - there was no fear of being outgunned. I never needed to use half of the things I knew, but they were there, in the background, like a full tank of petrol, ready to emerge as a matter of interest, or to help in the delving. And when an earnest child assured me that it was wrong to start a sentence with "and" I was able to assure them that it was perfectly fine as long as you knew what you were doing. That kind of thing.

Now for an admission. Every time I read something, I'm judging it by the standards that have their roots in this past. When someone who is supposed to be educated doesn't know their comma-splice from their dangling participle, I notice. When someone writes about English teaching and does so in a less than literate fashion, it pains me. But I wonder about the future - about whether all this stuff that lies behind my thinking about the language and what we do with it will come to be seen as irrelevant, and if it does, whether that will be because no-one will have been educated in the way that we were.

Was it boring? Did we switch off? Sometimes. But in the end, I acquired what I needed because I attended a selective school, and most of us accepted that we had to learn. Even my distractions tended to be academic, like reading a book under the desk. I didn't meet non-academic children until I started teaching. But here's a thing. A boring teacher will make anything boring. Everything they touch will be tarnished by tedium. Pupils seem to me to be less likely to accept boredom than in the past. They are used to professionally packaged entertainment, all the time, on tap. They know when someone hasn't got what it takes, and they react predictably. Gone the days - happily gone - when a class of forty would sit in silence while the teacher droned through a bowdlerised "Hamlet" without ever giving one of them a shot at the lead role. As for parsing ten sentences in their jotters before the bell rang ...

Happily,  the selection and training of teachers is quite another story.
Posted by Christine McIntosh at 6:23 PM 7 comments: