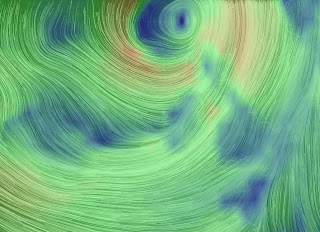 It's more or less dark now, this Christmas Eve, and I can no longer see the waves crashing over the pavement of the East Bay in Dunoon. I can, however, see the lights of our lifeline Western Ferries as a ship makes the crossing to The Other Side (we always think of it with capitals; somehow it seems to emphasise otherness...) after being off for several hours over high tide, and I can tell even without looking that the winds have eased off a bit.

I have been fascinated for several hours now by this interactive map , of which this is a screen grab - taken just now, as the storm moves off to the north east. At the height of our cut-offness, we were, it appeared, living in the windiest part of the globe and I felt small and vulnerable stuck up here in my study looking out over the turbulent sea.

But now I can start to feel the excitement of Christmas Eve building in me as I contemplate the shock of leaving a warm house to head further up the hill to church, the thrill of the dark church and the candles, and the privilege of singing with our quartet that will open the Midnight Mass. For the past 39 years this has been my Christmas - the tension and the joy in the darkness - and only when it is over can I relax.

Kids, get that champagne on ice!
Posted by Christine McIntosh at 4:48 PM No comments:

Mamma Mia, or what happens when you run out of tenors ...

You have to laugh. All these years of singing - it's a good 50 years since I last sang in the Hillhead High School madrigal group, at the time the acme of my singing career - singing said madrigals, to say nothing of masses, introits and anthems, hymns, funeral sentences ... I won't go on. You get the picture. When I was in my early 20s my ambition was to sound like Alfred Deller, and I got pretty close, even if in the doing of it I sang sharp because I wasn't using my whole voice; when I sat Higher Music in S6 I was made to sing soprano and cope with Gretchen am Spinnrade, inter alia. Since then I have been a sort of alto in various ensembles, from the St Maura Singers (a quartet, still singing together) through the New Consort of Voices (a group formed in Glasgow University, in which I met Mr B and in which we both sang till we left Glasgow for the wild west) to the Hesperians. This last was a four-part choir that we formed within six months of our arrival in Dunoon - we put the word out in the school and contacts formed quite literally on the street, and one September evening we hired a room in the school and waited. Within 30 minutes we had sufficient voices to cover the parts, and six months later performed Vivaldi's Gloria in public.

Eventually we ran out of tenors. The Americans left Dunoon, and some of our men with them. Age took its toll on others. We disbanded the choir and concentrated on church music. And then, years later, we retired - and behold: the women who had been young newcomers in the last years of the Hesperians wanted to sing again, and 8+1 was formed. Eight women, one man. Now there are ten of us, and the name is merely that and no longer a description.

And all this history is to tell you why you have to laugh. Because 8+1 can and does tackle the kind of music which has been my life all these years - but that's not all we do. And it's because we do other stuff that two weeks ago we sang a set of songs from ABBA's Mamma Mia, with a backing track, at a Christmas Party in Benmore Gardens Gallery, and are still the talk of the steamie. (These days, the steamie is the supermarket, where yesterday I met the organiser of the event: "best ever", she said.) It was completely OTT, that performance, because the backing track (yes, we have a backing track) got stuck on "High" and Mr B couldn't get it down before the one-page intro finished with the result that this choir of women, only one of whom is under 40, had to belt out the songs as if we were in the movie. We had not a microphone among us, but we made a helluva sound and we loved every moment of it.

Worse is to follow. I had never been a fan of ABBA (too old) and I hate musicals. I had to learn these blooming songs from the sheet music while everyone else was singing them from past knowledge - and "Waterloo" on the page ain't easy, rhythmically speaking. But now I've got them - and I'm stuck with them. For the past month I find myself singing snatches of Abba as I walk round the shops or hike up a glen. I fill silences with sudden bursts of song. I am handed a copy of Carols for Choirs and sing "Thank you for the music". No wonder ABBA were/are so popular. I shall never be the same again.

Mandela and a legacy


In the passing of Nelson Mandela, among the tributes and the claims and counter-claims (remember, he was a terrorist/he was no saint/there was the Malcolm X side too you know), I found myself discussing what we thought during these years when we were young and Mandela was in prison. What did our parents say? Did they speak of South Africa? Did they approve of the regime there, take it for granted?

My mother was born in Pretoria. She returned to Scotland as a young child, too young to have many memories other than the story that she had a nurse who dropped her once. But she had grown up with my grandmother’s stories - the stories of a young woman being sent a Cape ruby by a man she hadn’t seen for two years, with a proposal of marriage and instructions to get it set in an engagement ring, a young woman from the Aberdeenshire countryside who sailed off to be reunited with this man, marry him and live in a small house with a corrugated iron roof. She used to tell me of how she loved to visit “Jo’burg”, and how she stood her kitchen table with its feet in cans of petrol to deter the ants, and how she worried that her skin would turn yellow with too much sun. But in the end it wasn’t these irritations that drove them home; it was the day that the boy who brought their vegetables warned them that he probably wouldn’t be there the following week because he was going on a march with Mr Gandhi - and he was right. He was imprisoned, and that was that.

So these stories came to me, from my mother and my grandmother, woven into the background of my own life. But they impinged more directly on two occasions. In 1961 - as far as I know - my mother had to choose whether to have South African or British citizenship, when South Africa left the Commonwealth. I remember my father joking about it, though there was really no doubt. It must have been shortly after that that she received a letter from a man she had been friendly with in the South African Club at University: could he bring his wife and daughter to visit, as they were about to visit the UK for the first time since the war? And so it was that they came and had afternoon tea in our house, all very polite and formal. (The man by this time was an Admiral in the South African navy, according to my father).

This was my first experience of a real, tension-inducing, verbal adult ... row. As I sat trying to make conversation with a girl of my own age whose Afrikaans accent was almost incomprehensible, I became aware that the adults’ voices were rising slightly, and not in the riotously jolly way I knew from my parents’ parties (mostly teachers). There was talk of “blacks” - even “Kaffirs” - and I could see that my father was about to launch one of his deadly diatribes. When it came, it was eloquent, short-lived and final. Our guests left. We tidied up the tea party while I learned exactly what the problem had been. For the first time in my life, aged 16 or so, I understood.

Understanding brought with it a recognition of how my home differed from that of many of my friends. My parents were left-wing Glasgow teachers, intellectuals who loved an argument, who expected their children to take an interest and join in meal-time discussion - though my mother always insisted that nothing too contentious was allowed to disrupt the digestive process. (By the time I left school I knew what an ad hominem argument was, and that it was an inferior form of debate.)

I know how fortunate I was. To grow up knowing that justice and debate and equality and self-knowledge and moral courage are part of the furniture, the fabric of one’s life - there is no gift I would rather have been given than that knowledge, and none that I would care more about passing on to my own family.

But that is for them to recognise, for I doubt if parents ever know.

Meanwhile, an era has passed and South Africa has to progress without the father who has watched over the country for the past quarter-century. Children, in fact, recognising their legacy.
Posted by Christine McIntosh at 1:31 PM 1 comment: