A couple of weeks ago, I went on an icon workshop. I spent four nights in one of my most familiar places, the Cathedral of The Isles on Cumbrae, doing something completely new; something that feels as life-changing as that January day in 1973 when I sang at the funeral of a friend who was also a priest and a mentor and came away changed for ever.

The first milestone was choosing my icon. Tatiana, our teacher, had brought some illustrations for those of us who had not already decided what they wanted to copy. I had downloaded a few versions of the Christ Pantocrator icon, as well as a photo of one I'd loved when I saw it but felt unequal to trying - one of the Noli me tangere moment, all facial expressions and sweeping robes. But when I saw the A4 sheet with a totally striking Pantocrator image, I was captured. Tatiana saw my face. "That is your icon," she said.

She explained that it was very old - probably 7th Century - and came from St Catherine's Monastery in Sinai. And right now the less ignorant reader will visualise what I'm talking about, because it's famous. But I didn't know this. I only knew that the face was really two faces - one the stern judge, one empathetic, looking right at ME. I took the sheet away to my room. By the time I went to bed, I was aghast at what I'd taken on. 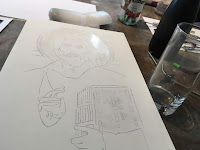 Work on an icon begins with tracing - at least, that's the way I took. Another person at my table, an artist in a way I could never claim to be, drew hers freehand with her original only for inspiration. Me, I was out with the carbon paper, trying to trace significant lines from an icon that was far more naturalistic than any I'd ever seen. And I didn't make very many lines. 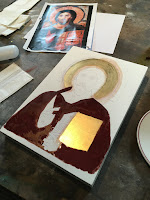 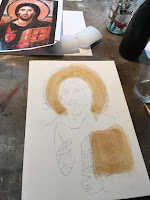 Then we had to etch the lines onto the white surface of the prepared board. Hindsight tells me I didn't etch enough - too few lines, too lightly scored. By the time I'd done the gold leaf halo and bible cover and "puddled" paint onto the garment and the face, I couldn't see any of the facial features. At all. "Leave it to dry,"said Tatiana. It'll probably be clearer in the morning - and the light will be better..." 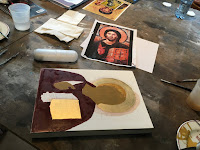 I spent that evening chatting to an old friend who'd turned up - a musician, from my other life as a singer. I told him how Tatiana had brought 3 eggs in a bowl for us to paint with - she broke them, separated yolk from white, took the whites back to the kitchen and left us the yolk with which to mix our pigment. I told him about the pipettes, the brushes, the feeling of being 14 again. Jonathan took my mind off my impending struggles, made me laugh - and I went to bed much later than I'd intended. 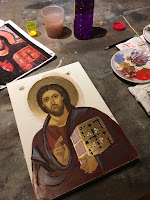 The second full day began with rain, less sunshine than I felt I needed - and only an eye visible on the face of my icon. By some miracle I managed to draw more or less freehand, with a hard pencil, the lines I was going to need to guide me. Then I returned to a more orthodox way of icon-writing, with brush and egg tempera and a plate to mix my pigment on. I felt like a real artist, in a terrified sort of way. But I was on my way, and during that day, and evening - for some of us returned to the studio to continue painting after dinner - I began to see the face of Christ emerging under my hands. 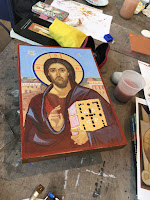 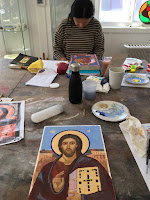 And it was that last realisation that grew throughout the third full day, by the end of which Titus, Tatiana's partner, had sprayed two of the necessary three coats of varnish - outside, in the gathering dusk, because of the fumes - on my icon, and it was almost finished. That day was spent on the background - which further research on YouTube has taught me shows the domes of the monastery of St Catherine, but which I modelled on the honey-coloured stone of an Italian town as I tried to realise what on the original was too blurred to be distinct - and on painting the border, and the sides and back of the board. Every now and then, as I'd been warned I would, I wailed for Tatiana to come and help me with an intransigent line, or the miraculous effect of painting a wash of unadulterated egg yolk over a whole area of my icon and leaving it to dry. And all that time I felt those eyes on me, boring into me as I stroked pigment over the cheeks, highlights on the sleeves, shadows under the palm of the raised hand.


The final morning was busy with varnish, photographs of each other's work, packing, paying - and praying. We took our finished icons into the cathedral, where they they were individually blessed with holy water before we took them up to the altar and left them there during the Eucharist.

One of my fellow-iconographers presided; others served and read; my friend Jonathan played the organ for us. It was over. I have never felt more exhausted, physically and emotionally. I wanted it to go on, but I knew I was too tired to do another brush-stroke.

Now my icon sits in an alcove in my house. I look at it every day. It has become a part of my life. And I can't wait to do another one. 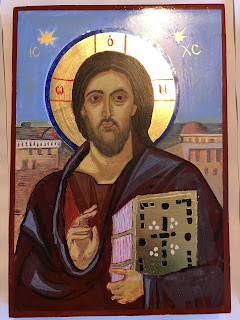 Posted by Christine McIntosh at 6:59 PM No comments: