It's midnight, or just past it. I should be asleep. We've got builders arriving in the morning to do destructive things to a wall inside our house. But I'm glad I stayed up to see this new video, and to share it, for the destructive things our society has done to people in all walks of life has been and still is far more destructive than anything the builders will do. I watched this video with a lift in my heart and hope for all my friends who are still denied equal status for their love in our society. It is indeed time for change, time for justice in our society.

Watch it.
Posted by Christine McIntosh at 12:23 AM No comments: 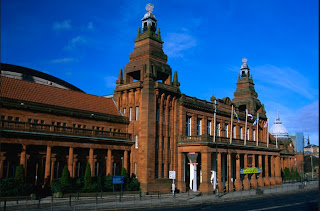 So the Kelvin Hall is to close. Gosh. It's taken me a while to catch up on this news, and it would seem that the arena was used for a final fling only last night. It's to reopen "by the end of the decade" as the - presumably very much bigger - Hunterian Museum, thereby merging two arenas, as it were, of memory, as far as I'm concerned.

So, as the space is cleared for whatever huge refashioning is to take place, I thought I'd take a totally gratuitous amble round my memory, beginning in childhood. I'm talking small child with parents, really, when I recall going to the Kelvin Hall Carnival - that magical time that straddled the Christmas holidays when the hall was filled with rides and amusements and the Circus lurked in the arena in the far left-hand corner of a space made bigger, it seemed to me, by the thundering machines that filled it. The Chairoplanes were always at the entrance - remember them? The whirling seats on the end of their chains, their screaming occupants high overhead, virtually horizontal as the momentum grew. I was never allowed to go on that (maybe because of this accident), and I don't know that I wanted to, but ... And the motorbikes, a faintly scarey ride of my almost-teenage years, a roundabout that at top speed made you feel as if you and your bike were heading straight down a dark tunnel, holding on for dear life as the centrifugal force tried to hurl you off.

My later memory of the Carnival involved going after school with three friends. We must have been about 15, I think, and the American Mad Mouse had arrived - a primitive and relatively small scale roller-coaster. The worst bit about it was the way you had to sit in the narrow, rocket-shaped car: astride a central seat with your legs out in front of you. I was stupid enough to go at the rear, and as we mounted the first steep incline, I realised I had three hefty schoolgirls to all intents and purposes sitting on my lap. Not a good moment.

I think I made it to the circus once. I was always being ill in the winter and you had to book. My parents probably gave up. I don't think I liked it much.

Later memories involve the SNO Proms. After the tragic destruction of the St Andrew's Halls, the Proms were rehoused in the Kelvin Hall arena. (We always said it smelled of elephants.) I shall never forget the rituals that quickly grew up - queuing just behind the red pillars at the front entrance (see photo) until the doors opened, then running like maniacs across the acres of empty floor to the entrance of the arena to get in the front row of the promenade area, where there was a bench laid all along the front of the stage, about three feet from the orchestra. Possession of a bums-width bit of bench meant you could sit out the hour's wait for the concert to begin, and go on sitting, if you wanted, during the concert. You were so close to the conductor and orchestra that you felt part of it, and you could catch the eye of players who might even - joy - wink at you. Who wanted to pay for a seat when you could have all this fun? I heard an astonishing amount of music this way over, I suppose, four or five years of prom-going.

And now it's closing. There's a sober chance I might never see it reopened. (Gosh. Again.) The hall is over - but the memories linger on ...

It always strikes me, in the
bright morning light
how the line on the cheap bathroom scales stops
always just short - or just long? -
of the magic figure that says
goal achieved. But I tell myself
and anyone else who will listen
that there’s a whole two big bags of spuds
gone already
melting as by magic
from the bits a friend called
stout
what a potent word, that
- stout -
and though the skinny form
of the almost-anorexic
(a word we didn’t know, then)
will never again be smoothly taut
nevertheless that almost-line
makes me feel a bit of me
has beaten the clock
and drives me on:
another bag?

My last post, as anyone who still reads this blog will know, was an appreciation of an old friend. And I was glad (you can tell I sang this yesterday, but that's another story) to learn that there was an obituary * of Alastair Fulton in the Herald last week. And that is where the gladness began and ended.

Previously I have bemoaned inadequate funeral services as being unworthy of the deceased and unhelpful to those who loved them. Now I find myself bemoaning what I see as a sadly inadequate piece of writing, let alone a reminder of someone I knew. There seems to be a tradition (is there?) that newspaper obits have to be dry and factual, covering a linear model of a life that resembles nothing so much as the "thank-you" speech at the end of a charity event: don't forget the lady who does the flowers or your life won't be worth living. That sort of thing. And as far as that goes, if indeed that is the requirement for a respectable newspaper, then as far as I'm concerned respectable newspapers have indeed had their day.

And that may be a very personal reaction to a piece that some of my friends thought was good. They perhaps had the advantage of hearing more of the real ABF at the funeral I sadly missed. What is not merely personal preference, however, is my despair that someone so linguistically talented and knowledgable should have been commemorated in such weak syntax. From memory, lest I come over all red pen, I shall recall only the strange use of the pluperfect verb in the opening sentence and the misrelated participle in the penultimate one. ABF would not have missed these.

So, ABF, this post is for you. Missing the certainty of acerbic comment on my own epistolary infelicities, I offer this last thought. You were much, much more than a mere list of activities could convey. Pervixisti indeed.

*Of course, obits like this can also be read online, but the ethos remains...
Posted by Christine McIntosh at 12:40 PM No comments: