I haven't posted for a bit. It's not that I haven't been sitting at my desktop: far from it. But from being someone who rarely uses earphones (they were so uncomfortable) and hasn't listened to much of what might loosely be termed popular music since the age of 18 (a while, then) I've spent most of the time doing just these two things. I always did love a good love song, back in the day, and I've always preferred what might be termed music to slit your wrists to ... And now I've rediscovered both, and as Facebook friends will hardly have failed to realise, I've been listening to Leonard Cohen.

I specified a sort of cut-off date for my interest in pop; it coincided with the rise of the Beatles and my discovery of Palestrina and Byrd and these two geniuses shaped my musical tastes for the rest of my life, I thought. Yes, there were other passions - Tippet, Tchaikovsky, Sibelius, to name the composers on some of my early LPs - but the music I loved to sing, and to sing along with, belonged to the Renaissance. I developed a voice as similar to the counter tenor as I could, and my reading abilities flourished as I sang in an octet (The New Consort of Voices, for anyone who was around Glasgow Uni circles in the late 60s/early 70s) and the quartet that still performs today with only a change in the soprano line, the St Maura Singers. We started a larger choir when we moved to Dunoon - The Hesperians, from the women of which group the current 8+1 choir was born. There was a church choir, intermittently - it tended to suffer from church politics and eventually vanished.

All this was made easier, of course, by the fact that I'd married a musician who works magic with choirs. But living with a musician also tends to influence some - not all - of the music played at home. Because of that influence, I've learned almost all I know. But because the current choir, 8+1, sings everything from Ah Robyn to Mamma Mia, there's been a shift in my earworm availability, and one of our repertoire got stuck that way: Leonard Cohen's Halleluia. And it was seeing a video on Facebook/YouTube of a live performance by him, a recent live performance, that started me on the online trawl for other songs of this performer who was in his mid-70s at the time the recordings were made - and that's what I've been singing along with for the last two months. 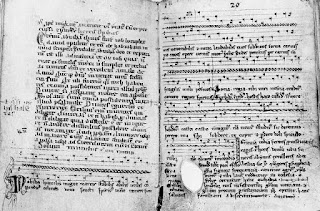 So what made me want to reflect on this? Here's a thing. For the whole of July until today, we've had work going on in our dining room. The painter finished only this morning. The floor is varnished, the room is clean - and empty. It has a wonderful acoustic. So yesterday the two of us, Mr B and I, sang and recorded St Magnus' Hymn - the two-part 12th Century piece that begins "nobilis, humilis...". And after the first go, when I was singing at my usual mezzo pitch and straining slightly on the high E, I went down an octave and immediately sounded - and felt - better. This is an area of my voice that I've been unhappy with recently; helping out on the second soprano part has led to the neglect of the lower end of my voice, with the break at Middle C becoming more troublesome than it has been since I was in my early 20s. But yesterday it was fine, with an equal resonance taking me down to F.

Why? Presumably because the ageing voice of Leonard Cohen means he now sings in his boots, and that's what I've been singing along with. I've not been belting it out, just crooning, but that gentle exercise has been enough to make the difference. I feel somehow vindicated - that I've not wasted the tradesmen-minding hours listening on headphones, but have done something my laziness has too often stopped me doing when I've not practised vocal exercises. And I've learned some cracking new songs ...
Posted by Christine McIntosh at 1:14 PM No comments: