There, then, you have it. Synod recollected in tranquillity. 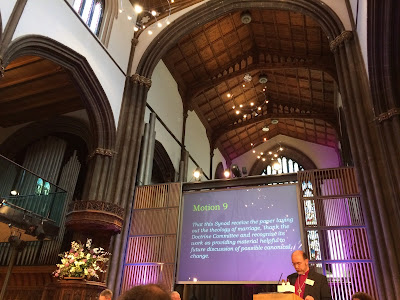 We used to have an English teacher, a formal, pin-suited, begowned sort of chap, who was in the habit of saying "There, then, you have it" at the conclusion of any discussion. It's the phrase that comes into my head as I sit down to recall the events of last week's General Synod of the Scottish Episcopal Church, perhaps because in all likelihood it will be my last. If it is, I'm glad I made it so far; glad I was able to make a contribution to the effort to move my church forward in its recognition of the diversity and sanctity of human relationships. Others - notably Kelvin and Beth - have been much quicker off the mark, blogging in the evening what had happened during each day; I blame the fact that I only had my phone with me to excuse my failure to do more than tweet at the time.

It began, really, with the motion showing on the screen in the photo. There were other motions that seemed more promising, but this was the starting point. We'd all (I hope) read the Doctrine Committee's lengthy report, and receiving it was a start. The thing was that every time - were there three times in all? - the issue came up, people debated. Some contributed considerable points; others expressed bitterness. There were clearly people who felt that their traditional stance was no longer being given a chance - and believe me, it was traditional. I worry when someone says with calm certainty that they know what God wants. But there were also contributions on the side of change delivered in the measured tones of compassion and reason - words spoken by people I have grown to respect and admire - and I could feel a change in the atmosphere as we moved towards the vote that would result in Synod's deciding to ask the Doctrine Committee to remove the first section of Canon 31. ( The Doctrine of this Church is that Marriage is a physical, spiritual, and mystical union of one man and one woman, created by their mutual consent of heart, mind, and will thereto, and is a holy and lifelong estate instituted of God.) Apparently - and I hadn't realised it - this section dates only from 1980 or thereabouts, and was inserted by the last Provincial Synod, of which I was possibly the youngest member, after the debate on the remarriage in church of divorced persons. I well recall that debate; it seemed such a big thing at the time.

You can read more details in other places. Don't come to me for details. I'm inside my memories now, and they're not especially precise. At the end of the first day's debate, I spoke on the nature of marriage in relation to the idea of man and wife being one flesh. That makes it sound measured, considered - "I spoke". But it wasn't like that. I was prompted to my feet when someone said something that I couldn't let pass, and then sat there waiting my turn with nothing in my head but scraps of Shakespeare - Hamlet saying "Husband and wife are one flesh; therefore my mother ...". I didn't know how I would begin, even, until I stood up. And then it came, and I said my piece fluently and I enjoyed saying it (I love a microphone) and people clapped. The following day I was bowled over by the words of another woman of my own generation - and people clapped. A bishop made it clear that sexual ambiguity is in all of us, and did so by recounting his own experience, and the silence as we listened was one in which I felt that something hugely hopeful had come into our midst.

But when later that day the votes were counted, there was no applause. No-one punched the air, and the sense was one of relief rather than triumph. It was as if none of us dared to believe that after all these years the church had taken the first hesitant step towards recognising that the God we believe in made us all the way we are. I was aware of tension lifted; there were tears from those that in the end we had been discussing all those years. There was a knot of people sitting together who had voted against the motion and against the idea. Their faces were tight, expressionless. It will be hard for them, though not, in my opinion, as hard as it has been all those years for the excluded and the patronised, those who, like all of us, have no choice in the matter of their sexuality.

One thing seemed to lurk like a cloud on a sunny day, and that was the defeat of the Rule 10 motion on Saturday. In a house depleted of those who didn't attend on the last morning, a majority wanted to discuss the possibility that the bishops would look again at their decree that no-one in an equal marriage could be considered for ordination.* But it was not the required 2/3 majority, so we didn't even get to discuss why they might decide to let it stand. I know that at least one bishop voted for the motion, but the Primus did not. Oh yes, there's a kind of logic to this apparent failure of logic: the change to Canon 31 will take over 2 years to become law, and has to pass through two readings and debate at diocesan level before it can do so - therefore let's not pre-empt the outcome by even thinking about changing our minds on this one. No hope held out, then, to someone in a same-sex marriage who might long to put herself forward for consideration and training; they will have to wait even longer.

It must be tough being the chairman of the board, the Primus inter Pares (first among equals) who has to front the decisions and - presumably - carry the can for whatever goes wrong. The Primus presumably doesn't want further to dislocate the noses of those who are sure we're all heading to hell in a handcart. But at least one of his equals felt we should be discussing further thought, and I thank God for him and for all the brave souls who have spoken selflessly and thoughtfully for change. It is they who inspire confidence in our church and its future.

Despite that last-minute barrier to change, it is once more a church to which I feel able to belong with joy.


*As has been pointed out elsewhere, you can apparently be considered for ordination if you are in a civil partnership, or merely quietly getting on with whatever arrangements you like to make for yourself. It's marriage that's the bar.
Posted by Christine McIntosh at 11:39 AM 2 comments: