Every now and then, someone at church remarks on the apparent miracle of the suitability of the hymns (chosen by Mr B) for the lectionary of the day, and while it is true that Mr B chooses the hymns with great care and does in fact read the lectionary readings while doing so, he is helped by a useful RSCM publication which lists a multitude of suggestions from a variety of hymnbooks. One of the suggestions for today's final hymn was We are Marching in the light of God.

At first it seemed an odd choice. Lent. Mainstream church. A particularly trying time for our diocese and for our congregation, as the challenges of our Victorian buildings multiply and with them the tradesmens' bills. But in fact it turned out to be just right. This African song, with its origins in protest, lifted us on this freezing Sunday so that we sang, and clapped (on the back beat too!), and felt warmer, and found ourselves smiling. Yes, things are hard in our church just now - but we aren't alone, are we?

And I'd never in a month of Sundays have thought the congregation of Holy T would swing so well!
Posted by Christine McIntosh at 11:24 PM 1 comment: 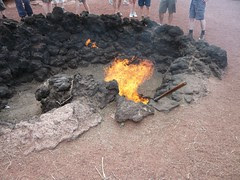 And grow hotter
Originally uploaded by goforchris.
A reminder of the power lurking just below the earth on Lanzarote hit us powerfully at Islote de Hilario,Timanfaya, where a residual chamber of magma remains close to the surface - what vulcanologists call a geothermic anomaly. Every ten minutes or so, a National Park employee in a strange, dust-coloured uniform entertains tourists with a demonstration of this power when he thrusts a scrub bush into a hole in the ground (see photo). Within seconds there was a strong smell of toast burning, and shortly afterwards it burst into flame - very hot flame. We also saw geysers produced by pouring water down a pipe in the ground, chicken being roasted over what looked like a well outside the restaurant but was in fact a pit of intense heat, and picked up small stones that were too hot to hold for any time.

All very entertaining - well, no, actually: more terrifying. There was nothing man could do to affect this energy - it just was. The smell of the volcanic dust was so prevalent that I can smell it still when I write of it, and the texture of the vocanic debris like nothing else I have walked on.

The Lanzarotenos (this should have a ~ above the second 'n', but I can't work out how to do it - Lanzaroteños - hurrah!) have an ambivalent attitude to this whole aspect of their island, protecting what was in effect a dreadful curse; everywhere we see evidence of the work of César Manrique who supervised the building of the Ruta de los Volcanes over which we were driven and designed the symbol of the park - and who decreed that no buildings should rise more than two storeys about ground level. This extraordinary level of control means that everywhere on the island you see little white boxes, with green window-frames (unless at the seaside, when they are blue). It makes our own National Park restrictions seem liberal indeed.

When I look back at the experience - we were on a walking holiday, and covered considerable ground on foot, along with an agreeable bunch of HF types - I feel that apart from the experience of summer weather in February there isn't much I'd go back to Lanzarote for. I feel it's a faintly melancholy island, with little going for it and a great deal to struggle with to make a living. I may be wrong - but that eruption in the 18th century dealt a blow that the island still has to work hard to recover from.

By the way - their roundabouts (on the roads) are magnificent. I kid you not.
Posted by Christine McIntosh at 6:24 PM 5 comments: 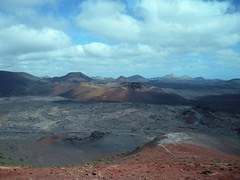 Volcanic landscape
Originally uploaded by goforchris.
Lanzarote is a strange place. In fact I'd had no idea how strange - when I told people we were having a winter break in Playa Blanca they said "Oh, it's lovely" and left it at that, so when we arrived and I saw the black land everywhere and the low-rise white cubes of the houses and the pointed black and red hills I was aware that had I been there only to sunbathe and walk up and down the pleasant promenade of the town I'd have been depressed long before my week was up.

However, once I'd grasped some of the history of the landscape, I began to see things differently. Between 1730 and 1736, and again in 1824, huge volcanic eruptions, in one of the most spectacular eruptive processes in the Earth's volcanic history, drastically changed the shape of the island and left a quarter of it almost completely buried under a thick layer of lava and ash - 174 sq. kilometers of it. If you're interested in such things, the lava is of two types - the jagged "aa" lava, and corded "pahoe-hoe" lava, is completely impassable, and has been marked by very little human impact.

I was moved by a contemporary account of the first eruption - for this was happening when people in mainland Europe were listening to Bach, dressing in silk hose and full-bottomed wigs, even more recognisable as our forefathers than was Pliny when he wrote about Vesuvius, and somehow that made it all the more vivid. Don Andrés Lorenzo Curbelo, the priest in Yaiza, wrote this:

On the first of September 1730, between 9 and 10 o'clock at night, the earth suddenly opened at close to Timanfaya, two leagues from Yaiza. On that first night, and enormous mountain rose up from the heart of the earth, and from its summit there escaped flames that continued to burn for nineteen days ... They were accompanied by a great quantity of lapilli, dust and ash that spread over the surrounding areas and from all sides drops of water fell as rain. The thunderclaps and explosions that accompanied those phenomena, the darkness caused by the mass of ash and smoke that covered the island, forced the inhabitants to flee more than once...

Today the volcanoes are silent, but their power is still apparent. I shall return to Timanfaya in another post.
Posted by Christine McIntosh at 3:49 PM No comments:

There's a new poem - or maybe it's a prayer - over on frankenstina, which I used as the meditation during Morning Prayer on our last morning at the House of Prayer on Iona last weekend.

I shall return to this visit when I've done with my holiday on Lanzarote, from which we returned two nights before we left for Iona. Two very different experiences to build body and soul as we come to the end of winter.
Posted by Christine McIntosh at 5:32 PM 2 comments:

I've been neglecting this blog for the past fortnight - away walking in Lanzarote for a week, of which more anon, and now off to Iona for a couple of days. Normal service will be resumed as soon as possible, but in the meantime there are a few Lanzarote pics on flickr
Posted by Christine McIntosh at 10:47 PM No comments:

I've just finished reading The Book Thief by Markus Zusak. And I mean "just finished", which means that I'm still steeped in the smoke of burning Himmel Street in a small German town as the second world war turned against Germany, still caught in the mesh of words echoing the words of the book thief herself, regretful and bereft because it's finished.

This book is beautifully written. It's quirky and unusual and the narrator is Death - a narrator you soon learn to trust utterly. It tells of the wartime experience of a young girl, living with foster parents, learning to read after she steals her first book. In the end her books and her writing save others, save herself and have a profound effect on Death himself.

It's the best book I've read in ages.
Posted by Christine McIntosh at 6:43 PM 3 comments:

Chimney pots but no smoke

No white smoke from Dunoon, but a tale of five chimneys - or rather, five Victorian chimney pots, the organist, and the organist's wife.

Yesterday, as the candidates for the post of Rector here were shown round the church and rectory, we noticed that the builders working on the roof had removed the massive chimney pots and set them in a row in the back garden. Now, it is a fact that these pots are much prized around these parts - indeed, the one that survived from our own chimney now stands in my garden with a small thyme bush growing in the top of it, and very ornamental it is too. It is a sadder fact that such objects left untended around these parts will be nicked - especially if no-one seems to be around.

It was decided, therefore, that the pots should be moved into what was once the coal-hole at the rear of the rectory. Now, for reasons I'm not going into, it came about that Mr B was unable to meet one of the three able-bodied men in the congregation at the hour appointed for this bit of heavy lifting, and rather than leave them out for another night he and I decided we would do the deed ourselves. As the light faded this afternoon, we headed for the back of the rectory - the very place where those entrusted with choosing our new incumbent were still closeted with the Dean. We crept inconspicuously up the slimy bank. The pots sat there, dauntingly large, at the top of the back green. We laid hands on the first one. The top of it turned out to be in two parts, the outer of which moved disconcertingly. Our hands were already covered in a noxious mix of soot and green slime, but we began to manhandle the brute towards the door, rotating it over the soggy grass.

I can't keep it up, this blow-by-blow account, but must hasten to the good bit that didn't quite happen. By the third pot I had hit on the brilliant idea of letting it topple onto its side and rolling it down the slight incline to just beside the step of the coal-hole. By the fourth, I was feeling bolder: the pots really moved quite rapidly if you helped them with a shove. But I have to tell you, Best Beloved, that the fourth pot almost got away. And if it had, it'd have careered down the bank and into the unfamiliar green car that presumably belonged to the Dean. So picture, if you will, the organist and his lady wife, doubled up in mirth, diving to restrain a slimy Victorian chimney pot while smothering hoots of laughter like a pair of naughty weans.

I have to report that a coffee-seeking church official saw us and opened the door, and that the chimney pots are now safely locked away with the dwindling supply of parish booze. But where, pray, will the white smoke come from?
Posted by Christine McIntosh at 11:45 PM 7 comments: