I've been away. I'm back. And actually I've been home for a fortnight, but so far I've not felt able to write about the most extraordinary journey of my life. It was so different, you see - and though conversation with a friend and reading travellers' tales and watching movies and having my evening meal with the Vietnam war playing on the telly had all done their bit, nothing had quite prepared me for the experience of being in Vietnam and Cambodia. It was, indeed, only after returning home that I read, in the small guide book that was part of our pre-holiday goody-bag, the immortal words "visiting Cambodia is more of an adventure than a holiday".

I must say at this point that what became known as "The Hanoi Cough" didn't leave us unscathed, even though I was absolutely unaffected until the day we left to travel home. (It's amazing, the protective power of belief: I was convinced it was an allergy to the pollution, of which more later). And on a small cruise ship - our home for a whole week of the trip - such maladies spread, despite the  precautions; I can only say that the other great threat to health and happiness was avoided by being scrupulously careful with what we ate and drank, and the neurotic sanitising of hands).

There are moments that I shall want to revisit, but right now I thought to record some impressions before they become part of what I know and therefore less remarkable. The first was the heat. I've never been in the tropics, and the half hour we spent outside the airport in Ho Chi Minh City (aka Saigon) waiting for a hapless wench who was having visa trouble gave me a chance to notice how soup-like it felt. It wasn't that I was sweating much - in fact, unless I wore a rucksack, there was little outward and visible sign of sweat the whole time I was there. Interestingly, when I look back on the holiday, I realise that at no time did I complain of being too hot, other than in the cabin at night when we started taking the advice of Aussies who said to leave the air-con at 26ºC to avoid drying the air so much that it made coughing worse. The heat beat down when we were in the sun, battered us with its ferocity, but with a decent hat and the right clothes it was fine, as long as we didn't think about it.

The pollution proved a greater problem. A cyclo ride through central HCM City meant sitting in an 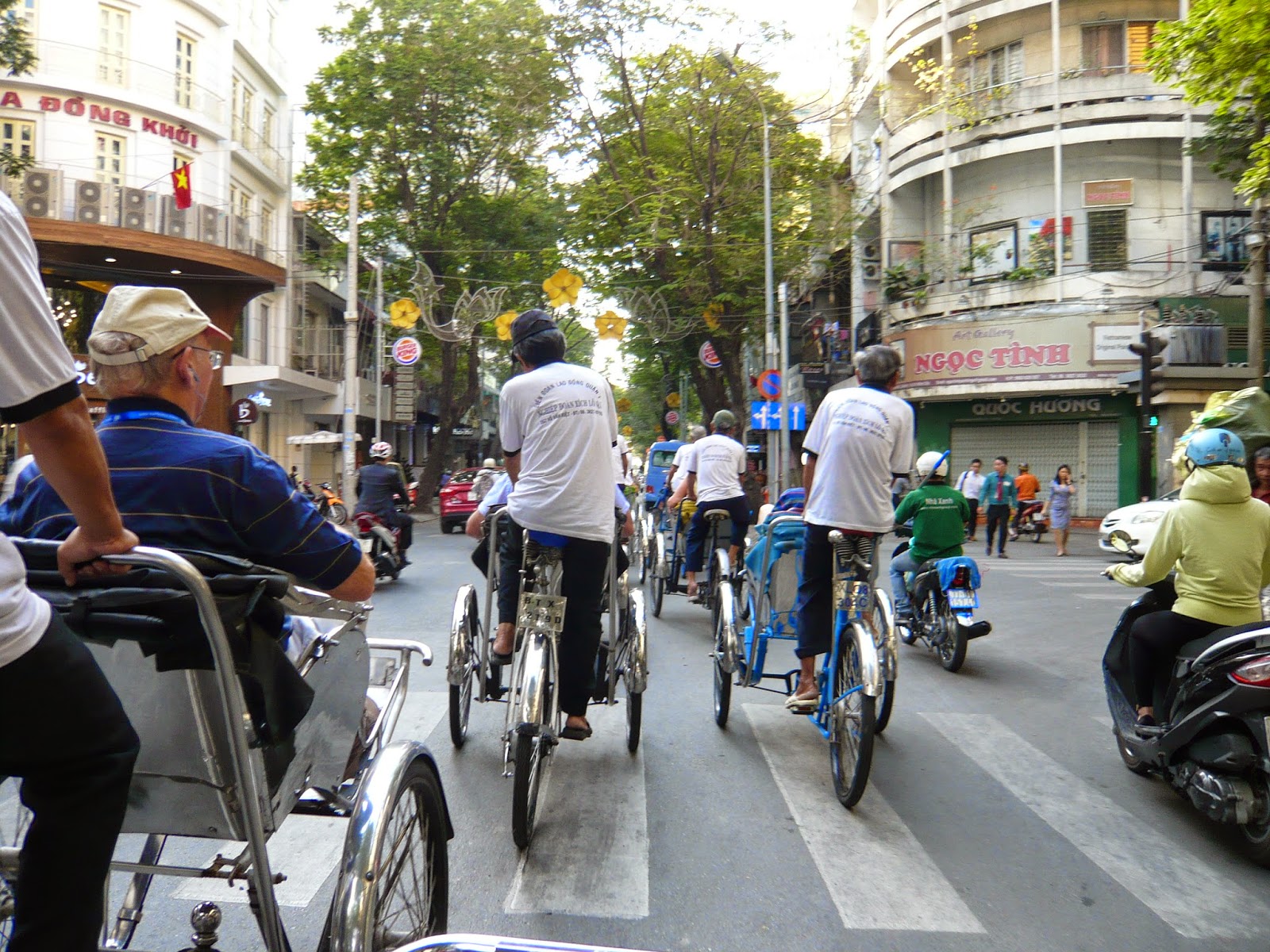 oversized bicycle basket being pedalled among hordes of motor-bikes along oceans of traffic while observing that my cyclo-rider and I were the only people I could see without a face mask. I am told that masks don't help with this kind of pollution, but the psychological effect was interesting. Even when we left the city and started to sail up the Mekong River we were affected - the farmers burn everything, so that a pall hung over the countryside every evening, and visits to traditional brickworks and crowded markets (where huge loads arrived on motor-scooters) all presented the same air-quality problem to someone more used to the cold wet sea air of Scotland in February.

All this sounds very negative, but the smells and the hot air were the ground bass to every other experience of the holiday, some of which were absolutely wonderful and require whole posts to themselves. But this introduction, an introduction for me as well as for anyone who reads it, will end now with a couple of generalisations. Vietnam seemed to me to be extraordinarily vibrant and go-ahead; the people seemed energised and forward-looking and the warfare of the 70s sufficiently in the past to be discussed as a proud history, even by people who were involved in it. Cambodia, on the other hand, showed me poverty as I'd never seen it: real, third world type basic living conditions; 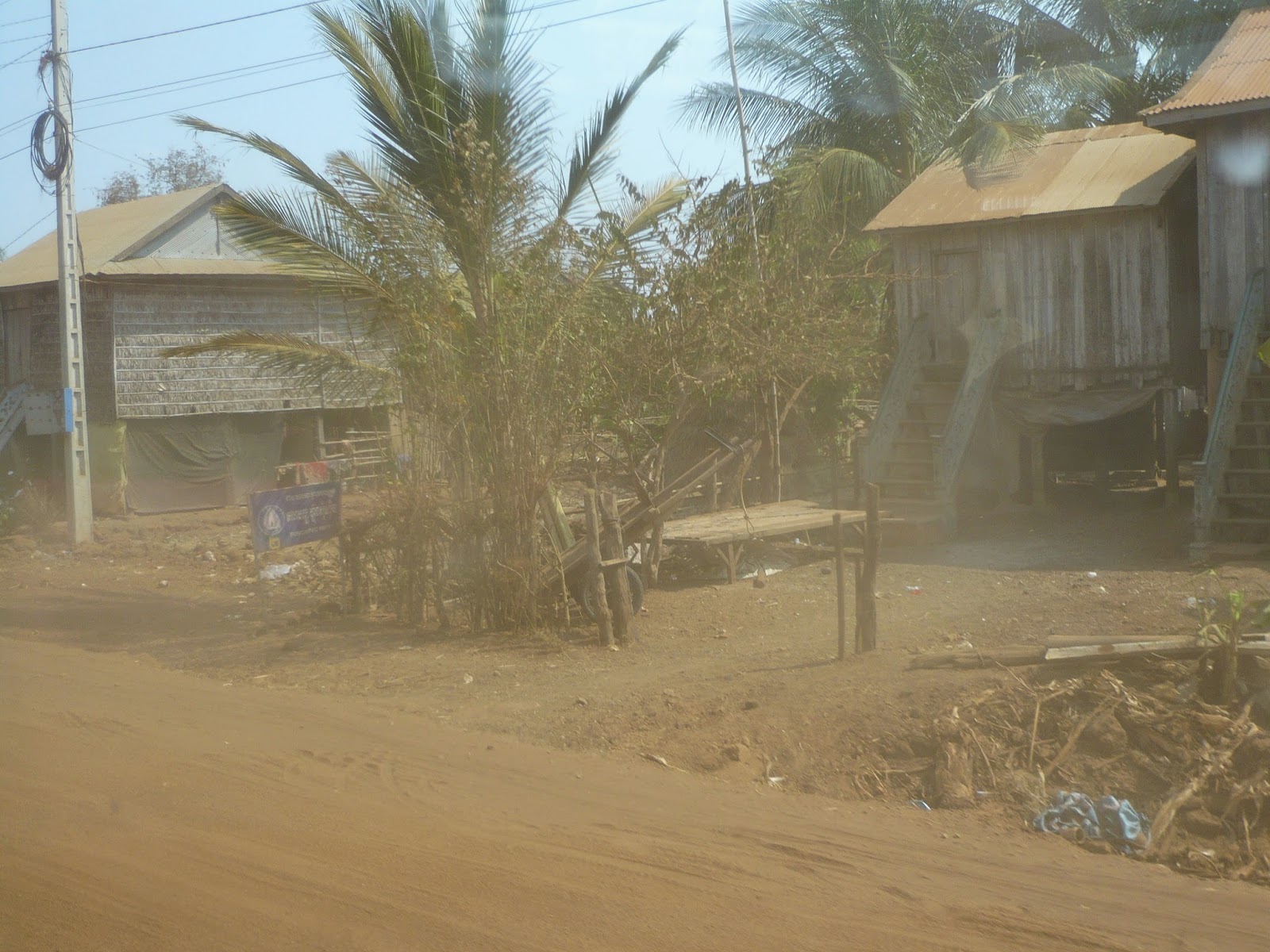 terrifying lack of sanitation; acceptance of standards of hygiene that made us quail. We felt unbearably rich as we dropped in from our other world; I felt horribly guilty as the procession of coaches through rural Cambodia showered red dust over every thing and every person we passed. I know that the organisation that took us there makes a big contribution to the economy - as well as supporting an orphanage in Siem Riep - and that by visiting we were assisting in the recovery of a country that had only recently torn itself apart in a particularly brutal civil war, but I'm still thinking about it. I learned a great deal.

A final impression? The people. Unfailingly gracious and smiling whenever we encountered them. And young - at least, young to me. The average life-span in Cambodia is 68; if you live on the river, it's 58. So young, and so slender.

Oh, and that brings a memory that makes me smile: That cyclo ride? Mr B and I were among the last in our group to mount up, so that we were at the back of the train of cyclos weaving out into the traffic. By the time we rendezvoused at the Reunification Palace, we were the first to arrive, and it was clear that my cyclo driver had enjoyed overtaking one by one his colleagues who were burdened by the large white people who filled their baskets.

Me? I felt smug.
Posted by Christine McIntosh at 4:59 PM 2 comments: