Defective articles and the Love of God

I've been catching up on an unread bit of a Sunday paper, and found an interview with actor James McCardle. In the light of what I've been involved in recently, this struck me:


People who live a heteronormative life might feel they are free but until we life a life that includes equality of sexuality, gender, equality of class, equality of race then no-one is free.

There's no freedom at all unless there is freedom for all. I understand there have to be labels when there is still a fight to be had, but that shift has to be cultural and it's never going to work if you keep dividing people.

Yes, you say - or do you? Not yet, it seems, if you're a certain kind of church member. And it pains me, as a member of the church for the past 44 years, to have to say that. Especially after the relief many of us felt when my own denomination (and yes - that's another division) decided at last to remove the barriers to equal marriage in our churches. And then it came to deciding where these marriages would be celebrated.

I don't want to go into agonising detail of my latest discoveries - the how, the when. But I want to ask a question. What in God's name is going on in the minds of the people - and I think and pray that indeed they are a minority - who stand, grimly or miserably, in the way, barring the use of "their" church buildings for the celebration of a same-sex marriage?

"It's the word 'marriage'" they insist. It means a man and a woman."

I can think, as my mind flounders in the face of their intransigence, of two things that I didn't get the chance adequately to point out. The first is that such a meaning of the word is but one of four in the quite elderly Concise Oxford that I consulted. The second is that it's a word. Not the Word of God, whatever I believe that to be, just a word. A different word in all the languages of the world, from the close relations of the Latin languages to the intricacies of Russian ... and take a look at this, from an excellent blog:


The word «брак», of course, has another meaning in addition to “marriage”. Its second meaning is “defective articles, discards”. While some marriages do end up discarded, the two «брак»s are not linguistically related.

Language is fascinating, but if I were to enter into any such detail in conversation I'd be accused of being intimidatingly clever, far too fluent for my own good. But for anyone to bar the way to an equal sharing in the love of God in the poor house that we humans have built to gather so that we can feel we are together in sharing that love, for anyone to use a pathetic, human concept, expressed in language that humans have made in order to communicate with each other as an excuse to reserve that space for their own selfish use - is that of God? We don't even need to use language in our deepest communication with what we call God - God who knows the secret of our hearts...

So I'll put it simply:

Language is not of God.
Love is of God.

Memories of a Hillhead infant 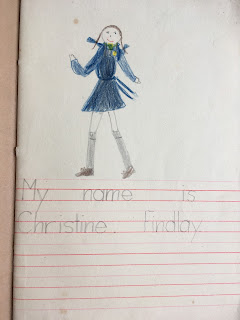 It was this picture that started it. I've been rummaging among my old teaching materials and came upon a small buff book, with cartridge-paper pages that are half blank, half ruled in light and heavier red. This pre-dates all the other stuff I found, as it comes from my childhood. From 1952, I would say, when I was in Infants 2 in Hillhead Primary School in Glasgow. A chance remark on the Facebook conversation that followed its publication there brought memories flooding back - far too many for that medium. And it struck me that this is social history as well as my history, and I find it fascinating. That's what brings me back to Blethers after so many months. I want to write it down before I forget, or before no-one who was there is around to remember with me.

Let's begin with Christine Findlay, pigtailed in Primary 2. By this time she will be almost 7, because her birthday is in September. This meant that she started school in January, already 5 years and 3 months old and able to read. She is no longer playing with Plasticene and lacing cards (the latter, for some reason, a great thrill; something never seen at home). 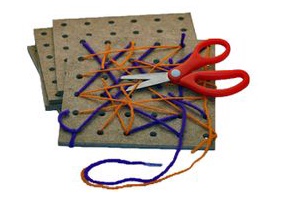 Presumably for reasons connected with accommodation - and perhaps staffing - her class was called 1e and the school day began at 1pm and ended at 4pm. She travelled by tram from her top-flat home in Hyndland along Great Western Road to the foot of Cecil Street, where she crossed the main road with the help of a traffic warden. (He was once knocked down while she waited beside the road - perhaps this story will reappear). The lunchtime journey cost a ha'penny - the "Ha'penny Special" for school children; the return a whole penny. A yellow ticket at lunchtime, a blue to go home. Six months later her class became 1a and attended school in the morning. I cannot recall - see: it's going already - if the beloved Miss Buchanan survived the transition to morning class or if it was then that Mrs Reilly appeared, a red-haired, vivacious woman confusingly addressed by older pupils as Miss Forrester.

It is her class that provides this book, and some of my clearest memories. I can actually remember writing some of the legends in it, drawing the pictures to go with the writing exercise. In the course of it, we moved on to joined-up writing, copperplate. But before I go there, a vivid, stressful moment...
We were writing the letter l, lower-case, on the same kind of ruled paper as is above. And I couldn't work out how long the letter l (lower case) should go on. How many lines? Two thick and two thin? It looked far too long and wavering. I was distraught. We were forbidden erasers. Even when I saw a friend - was she a friend? - doing what looked a more correct version, there was no way I could hide my shame. I was a fool, and I blushed. That perky child in the picture - wearing, I notice, the regulation school winter jersey with the collar (striped in school colours) through which one threaded the school tie under the gym-slip - was feeling anything but perky.

But I progressed. My writing became fairly spectacularly neat copperplate - an example occurring in the day we learned about Diogenes. There is a wonderful picture of someone else's vision of how he might live here, but this is what I drew. 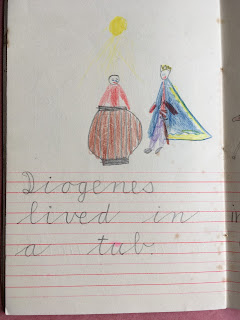 On other days we drew such things as the Glasgow coat of arms (so hard, these fish!) and a cuckoo which still looks quite convincing. All with this amazing writing underneath. Of other learning I remember less; I was bored much of the time during reading lessons because I was already a fluent reader and became cross at people who read aloud each individual word. Clearly, I was not destined to be a patient person.

I think there were forty children in my class, boys and girls equally distributed. The "a" designation referred to our birth dates, and all of us had our birthdays between September and December. We were the oldest class in the year group, we had had two terms of education more than the rest of the year. We felt superior, and no doubt we acted that way. We had embarked on our Hillhead journey. And the next time it's raining and I have little more to do, I'll regale the waiting world with a few memories of the next stage of that journey ...
Posted by Christine McIntosh at 3:44 PM No comments: