I and me and chord sequences

Oh bother. I'm feeling a grump coming on. Having spent longer than is sensible reading old green Penguins - see past entries - I buy a couple of books at the church coffee morning. One, the first Simon Serrailler thriller by Susan Hill, I enjoy immensely and am glad to discover there are many more - though a chance conversation with a pal who has most of them leads me to guess at the dénouement earlier than I would have liked (deduction based, if you're old enough to recall it, on memories of the TV series The Virginian).

There is, however, one fly in that particular ointment - a solitary grammatical howler that stabs me to the heart in the middle of such a well-written book. As it's about two-thirds of the way through, I find I'm slightly on edge for the rest of it. Will it happen again? But it doesn't, and I'm glad.

And now I'm onto an American murder story - just started it. The Faces of Angels by Lucretia Grindle. Follow the link and read the reviews - sounds good, eh? Set in Florence, interesting perspective on a murderous attack near the beginning - all very promising. And then the glaring errors slip in, one after another. "I" instead of "me" - that sort of thing. I don't know if I can go on reading it, for I suddenly find myself becoming critical of descriptions, names (Kirk. I ask you...), vocabulary. I develop a sudden loathing for the word "gotten".

I used to get irritated when Mr B didn't like some piece of music because of some poor chord progression or somesuch (many a modern hymn suffers from this). But I shall not be irritated again. Not by that, anyway. Because I am just as bad, and right now I'm sufficiently irritated at myself, let alone at writers who should know better or composers who didn't do enough harmony at school.

As I said: bother.
Posted by Christine McIntosh at 6:56 PM 1 comment:

I've been singing again. Back to where, in a way, it all began - and the time when the text on the left was at once wondrously strange and increasingly familiar. If you sat Higher Music in Scotland in 1964, it may well seem familiar to you too - for that year one of our set works for study was a group of pieces from Musica Britannica Vol XV - Music of Scotland 1500-1700, edited by Kenneth Elliott. I have a clear memory of standing round the piano in the Music Room (Room 16) of Hillhead High School with a group of friends, singing our way through this particular song as best we could, the sight-reading of music and language taxing our brains and leading to much hilarity - before we started again, determined to get it right.

After I left school I met Kenneth Elliott at Glasgow University, not because I studied music (though I did, for one year, to make up the so-called "science" subject in an Arts degree) but because I sang with a small group who actually performed this music he'd spent so much work on. We were invited to his house for evenings of singing and wine; we stiffened the ranks of various University choirs as they struggled to meet his demands. I've been singing it, on and off, ever since.

And this is why, a couple of days ago, I found myself singing this music of a Scotland that few really know about - singing it with the St Maura Singers, the quartet that has been a thread through my life since the late 60s, rehearsing for a memorial concert for Kenneth Elliott which will take place in the original home of the St Mauras, The Cathedral of The Isles on Cumbrae. We're doing a whole programme of this music, almost all of it for four voices, and one of the pieces is Support Your Servand - which in fact we've never performed. I was eighteen again, suddenly - and it was as if we were seeing it for the first time.

Read the words again. Read them aloud. How are you pronouncing them? How, gentle reader, will we pronounce them? This is a discussion we have every time we perform any of these pieces. Are the "oi" sounds as in "hoy!" or simply the modern "sore"? And we listen to recorded performances - much lauded - in which the accent is so ... Scottish? ancient? ... as to be incomprehensible, and we wonder if anyone in the audience will have a clue. And then we found what Kenneth himself had to say about it, and it was wonderful.


I would once again urge singers to pronounce the Scots texts as naturally as possible, without recourse to the extremes of local dialect: these text are related to the courtly tradition of Scots poetry, written by sophisticated Scots of burgh, song- or Grammar-school and university, in touch with, if not even part of castle and, ultimately, court culture, rather than the rustic precursors of bothy balladeers, kailyard confectioners or Doric dropouts.


I can hear Kenneth's voice here - and a degree of exasperation (I would once again urge..) Obviously he's had this conversation before. So we will not roll our 'r's more than normally, nor will we sound like The Corries on a culture trip. The music - in all its complexity or its deceptive simplicity - will speak as well as we can achieve. And despite all the people who have sung it since, we will know that we were there very early on in the performing of it.

And somewhere, I think Kenneth will be smiling.
Posted by Christine McIntosh at 5:38 PM 1 comment: 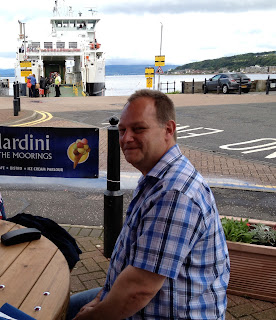 People who don't know about blogging still - after all these years - sneer at the idea. I'd rather meet people and have real conversations, they say. What they don't understand, of course, is how much more real your conversations can be with someone whose blog you follow - making it possible to meet someone you've met for only five minutes on one previous occasion and know where they are in life, what interests them, whether or not they might enjoy a bacon roll on Largs seafront ... You get my drift.

And so it was, dear, persistent reader, that Mr B and I had lunch with a certain weel-kent blogger known as Mad Priest, along with Mrs MP and two well-behaved collie dogs, at a pavement table outside Nardini at the Moorings, handy for the Cumbrae ferry - of which more anon. I am happy to report that we blethered non-stop for over an hour and a half, ranging through various ecclesiastical topics (liturgy, for example) to the merely gossipy (you can guess that bit, especially if you're a Pisky). We were heading on to Ayr for a party, and the MPs were - on my recommendation - taking the ferry to Cumbrae.

It's always a risky business, commending something you hold dear to someone else. This holds for poetry - oh, the risk of exposing your favourites to a new class of students - for music, and certainly for special places. People who know me know how special the Cathedral of The Isles has been to me for the past 43 years; now I was sending two people there without me, in the hope that they too would find it special. So it was with immense delight that I read Jonathan's blog post this morning. Quite apart from the relief, there is the interest of a new slant on a familiar place, the lovely photos taken by someone else of features I have grown to love, the affirmation that here indeed is a special, holy place.

And I even learned something new. About Elton John. Go and read it for yourself.
Posted by Christine McIntosh at 12:10 PM No comments: