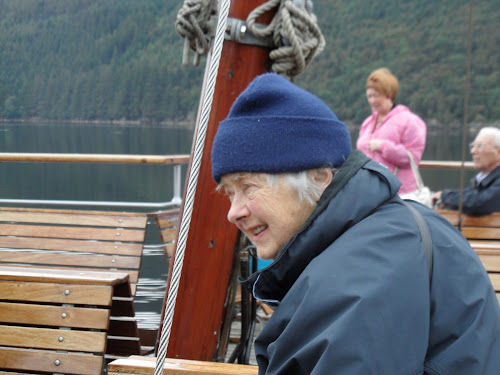 This week, Dunoon lost a warrior. Grace Page - or Dr Grace Dunlop, to give her her maiden name - died peacefully in the local hospital after a fall in her house. She was a week short of her 91st birthday. She had lived in Hunter's Quay as a child, an evacuee during the war, and as a frequent visitor during the years she lived in London with her husband Charles. But latterly, as travel became difficult, it was in the house in Hunter's Quay, with its view over her beloved Firth of Clyde, that she chose to live permanently, and, fiercely independent to the last, lived there until a few days before her death.
She became a part of my life, of our lives, through Holy Trinity Episcopal Church. That is where I first became aware of her as the most marvellous reader of lessons at the big brass eagle lectern. It was far too big for Grace's diminutive form to look over the top, so she would peep round the side of it as she read with enormous vigour, giving every character a different voice or adopting the persona of a prophet or St Paul as the reading demanded. It was obvious that she was completely unintimidated by an audience, this former University don, and had a firm grasp of the subject matter in hand.
For years she organised the Christian Aid collection for our congregation, challenging us to take whole areas as she did when she was well past the age when putting your feet up might be an acceptable option. When I took over her round with a friend, we were asked at every door what had happened to "the usual lady" - this in an area of hills and driveways, strenuous to visit. She cycled everywhere - though I do recall her driving and having an altercation with a fence beside a parking bay - and would appear at the top of Holy Trinity's hill with bike and wooly hat in all kinds of weather. In fact many of us will always think of her clad in the kilt, the wooly hat and her cagoule - prepared for Argyll weather at all times.
However it was through the music of the church that we really got to know Grace. Right up until the time when the church closed for the Covid_19 pandemic, she could be heard vigorously singing the hymns, especially the traditional ones, dropping - still perfectly in tune - to the tenor register when the melody went too high. Sometimes when she was very old she would confide to me "I really only come for the music, you know", and it was clear that the organist was the important one of the two of us. In the early years of this millennium, she paid for a new electronic organ, the old one (also electric) having gone up in smoke during a service one Sunday. Only last year, when this organ in its turn was showing its age (computers really don't last for ever, especially not in damp churches), she gave a generous sum towards replacing it. By now her memory was failing, and she would ask anxiously if she had indeed given the money, and if it was safe. We were glad she was able to be there to hear the new instrument and know that she was part of its story.
It is always sad to see someone of formidable intellect suffer the ravages of old age, and Grace knew what was happening to her. If anyone raged against the dying of the light, it was Grace. She became furious with herself, and those of us who had known her well knew the struggle this fury represented. She had never suffered fools gladly, and with the loss of memory came a loss of inhibition in letting us all know what she thought. But on the better days, she would tell us of her childhood, of her research work, of her days sailing on the Firth of Clyde, around Arran, all the wonderful places to which she was so attached.
In recent years, Grace longed for death, and her prayers for this mercy were audible. Now she is gone, and we have lost a formidable presence. Her legacy lives on, it is hoped, in the continuing presence of the PS Waverley on the Clyde, and, most poignantly, in the music of the church to which she had become so attached.  May flights of angels sing her to her rest, and may she rise in glory.
Posted by Christine McIntosh at 12:47 PM 1 comment: